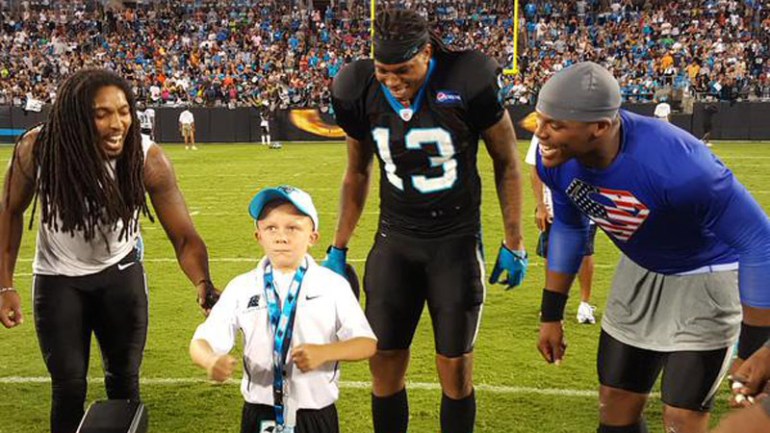 CHARLOTTE, N.C. — The 2015 Panthers Fan Fest showed off everything that’s right with the NFL.

It was a perfect night for football.

Oh, and a lot of people showed up for it.

More than 55,000 people turned out for this year's @Panthers FanFest- a new record! #GoPanthers @myfox8 pic.twitter.com/ynRwdJyAsN

A record crowd of 55,060 at Fan Fest tonight! Thank you for the passion and support #PantherNation!

And had fun with fans.

Braylon Beam, a 6-year-old cancer patient, got to be a coach.

Oh, by the way, Braylon can dance.

He does a pretty good impression of Cam’s “Superman” move too.

Then there were fireworks to conclude the evening.

@Panthers know how to turn up pic.twitter.com/CfCBHjxgMi

KERNERSVILLE, N.C. (WGHP) -- Police in Kernersville are asking for the public's help finding a suspect after an armed robbery on Saturday.

Officers with the Kernersville Police Department responded to a reported armed robbery at the Union Cross Adult Arcade Sweepstakes.

CABARRUS COUNTY, N.C. (WGHP) -- Three people were taken to the hospital after a crash near Asheboro on Saturday afternoon, according to highway patrol.

The crash happened near Cox Mill Road south of Ashboro toward Seagrove.

CHARLOTTE, N.C. (WGHP) -- The Charlotte Hornets and Bank of America partnered for the seventh annual Military Care event this month.

The full Hornets team and coaching staff, along with 90 volunteers from the two organizations working at home, partnered to pack 3,000 care kits to be distributed by the USO of North Carolina to military service members who are required to self-isolate after deployment for 14 days at a quarantine facility before returning home to loved ones.

4-year-old dies after being shot with pellet gun

‘Each year we add a little bit more’: Archdale couple puts on a show with Christmas display

Strange string of lights streaks across night sky; We got to the bottom of it