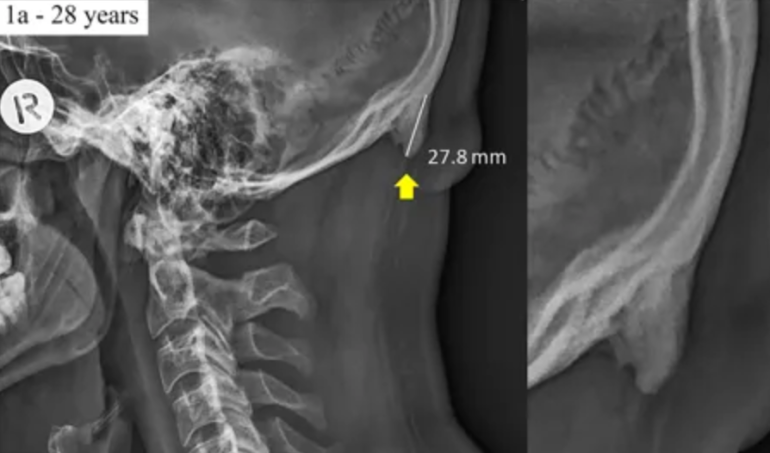 It sounds like a crazy tabloid headline—humans are growing little horns in the back of their skulls.

Except it comes not from a tabloid but a peer-reviewed study in Scientific Reports. Australian researchers say more people, young ones especially, are showing up with what’s known as an “enlarged external occipital protuberance” on the back of their skulls, just above the neck, reports the Washington Post.

The leading theory is that these spikes are caused by all the time people spend hunched over their phones. It’s throwing the body out of whack, resulting in the formation of what’s been variously described in coverage as bone spurs, phone bones, a bird’s beak and head horns. (The study itself includes an X-ray photo.) If you have one, you’d likely be able to feel it with your fingers, notes the BBC. It might even be visible as a little bump if you’re bald.

“I have been a clinician for 20 years, and only in the last decade, increasingly I have been discovering that my patients have this growth on the skull,” says researcher David Shahar of the University of the Sunshine Coast.

A previous Shahar study looked at 218 X-ray images of people between ages 18 and 30 and found that 41% had a lump of between 10 and 30 millimeters, per the News.com.au. The more recent study looked at a broader sample of 1,200 people of all ages and found the lump in 33% of the population, but most prominently in younger people.

Yet another study made the case that the cause isn’t genetic, but a result of the modern posture of staring down at tiny screens.

“These formations take a long time to develop, so that means that those individuals who suffer from them probably have been stressing that area since early childhood,” Shahar says. (Texting takes a heavy toll on your neck—about 60 pounds’ worth.)

GREENSBORO, N.C. — Sen. Amy Klobuchar stopped in Greensboro along the campaign trail, the week before Election Day in North Carolina.

Klobuchar held a roundtable on voting rights at the International Civil Rights Museum.

Sanders hosted the rally and march to early vote at the C.E. Gaines Center at Winston-Salem State University.

Corcoran said someone acting as her assistant sent an invoice to her bookkeeper earlier this week for a renovation payment. She told People that she had "no reason to be suspicious" about the email because she invests in real estate, so the bookkeeper wired $388,700 to the email address.

Turns out there are actually two species of red panda, not just one

Times of sun and clouds Precip: 30%