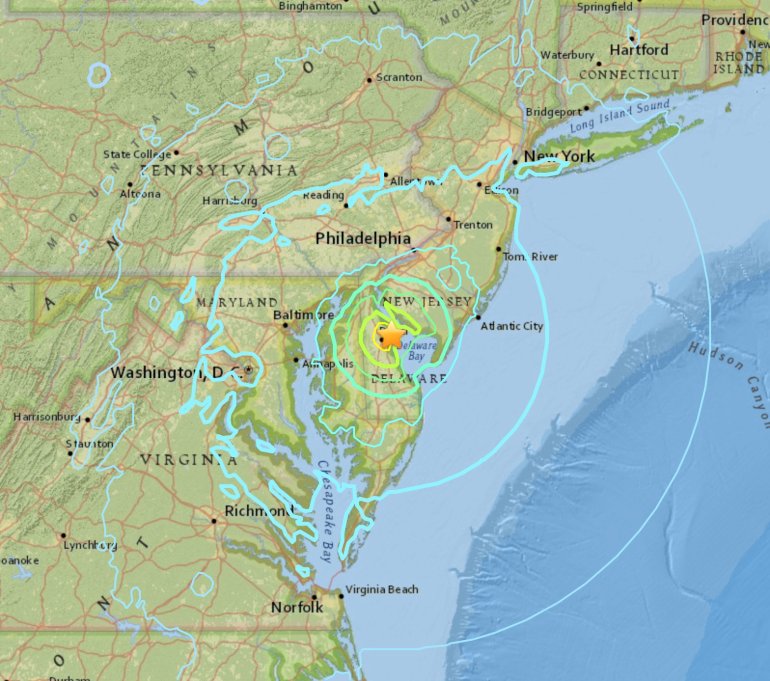 The earthquake was about 6 miles east-northeast of Dover and was registered at a depth of 5 miles.

“We definitely felt it here,” said Master Cpl. Gary Fournier of Delaware State Police. “We have not received any reports of damage at this time. (My) house shook and you could hear thing rattle. It sounded like a train and lasted about a second.”

Roland Balik, a spokesman for the 436th Airlift Wing at Dover Air Force Base, said he did not feel it but said people on base were talking about it.

According to a map from the USGS, the quake was felt in North Carolina, Virginia, West Virginia, Maryland, Washington, D.C., Delaware, New York, New Jersey, Pennsylvania and Connecticut.

A spokesman for New Jersey State Police, Sgt. Lawrence Peele, said: “We haven’t gotten any calls or reports of damage or anything like that. I didn’t feel anything.”

There were no immediate reports of damage or injuries in New York, the city tweeted.

While traffic concerns are steering neighbors away from the idea, people also have a problem building it next to a historical home.

‘It was like a flood’: Neighbors react to water main break, sinkhole in downtown Asheboro near City Hall

ASHEBORO, N.C. (WGHP) -- Asheboro neighbors reacted to a water main break that caused a sinkhole in downtown Asheboro on Monday.

"I heard 'brrr', like a water sound, and I was scared. When I saw, I was like 'oh my God,'" Mohammod Zubrair said.

‘No masks allowed’: Parents of at-risk baby asked to leave restaurant for not removing masks

ROWLETT, Texas (WJW) – Two new parents claim they were kicked out of a Texas restaurant for violating a "no mask" policy and keeping their faces covered out of concern for their immunocompromised baby at home.

Natalie Wester said in a Facebook post that it happened to her and her husband on Sept. 11 at Hang Time, in Rowlett, Texas.

When can your elementary school kid get vaccinated? Here’s what we know

‘I hope that I can honor him by the way I live my life’; Paralyzed officer receives kidney from fellow officer killed in line of duty

‘No masks allowed’: Parents of at-risk baby asked to leave restaurant for not removing masks