SARASOTA, Fla. — Sometimes it’s best to keep your Facebook comments to yourself.

When two men stole more than $1,000 worth of merchandise from a Walmart, the DeSoto County Sheriff’s Office shared the mugshots of two suspects.

Then, one of the suspects, Cody Pierce, decided to share his thoughts. 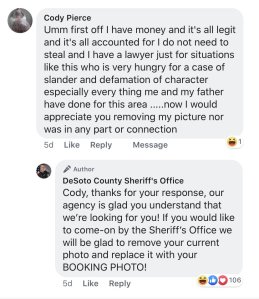 He goes on to say he has a lawyer who is “very hungry for a case of slander and defamation of character.”

“…..now I would appreciate you removing my picture,” Pierce said.

“If you would like to come-on by the Sheriff’s Office we will be glad to remove your current photo and replace it with your BOOKING PHOTO!” the sheriff’s office replied.

True to their word, the sheriff’s office shared the booking photo of “Cody ‘It wasn’t me’ Pierce,” as they called him, on Wednesday after he was arrested.

Pierce is accused of stealing the merchandise from a DeSoto County Walmart on Oct. 27 along with Michael Meacham, of Arcadia.

After arresting Pierce, the sheriff’s office also showed a blurry photo of a leg tattoo alongside a photo of Pierce’s leg tattoo to emphasize the similarities.

WYNNEWOOD, Okla. (KFOR) – Oklahoma State Bureau of Investigation agents are assisting an investigation at The Greater Wynnewood Exotic Animal Park, which was once owned by Joe Exotic.

WINSTON-SALEM, N.C. -- A Silver Alert has been issued for a missing Winston-Salem woman.

WASHINGTON – President Trump said Friday that he plans on signing an executive order on immigration that will provide a "road to citizenship" for recipients of Deferred Action for Childhood Arrivals (DACA) program.

Trump told Telemundo's José Díaz-Balart that he would be signing a "big immigration bill" that would involve the so-called Dreamers, immigrants brought to the United States when they were children.

Music for a Sunday Evening in the Park begins July 19; here’s the full schedule