VIRGINIA BEACH, Va. — A 22-year-old Virginia Beach woman was arrested on Sunday after police say she fraudulently took a lost dog, listing it on Craigslist and getting caught attempting to sell it.

The owner of the 3-year-old Siberian Husky named Nikita says she escaped from their yard near Taylor Road in Chesapeake on Saturday morning around 10:00 a.m.

But, just when Nikita’s owner started losing hope, he says he found another lead in the search for his beloved pet.

“It blew me away. Until now, I would have never thought anyone would do that,” Josh King said.

Jessica Colleran, 22, of Virginia Beach, is accused of picking up Nikita later that day after she was listed on a “found dog” Craigslist ad. Colleran told the finder of the dog that she was the owner, according to Chesapeake Police.

King says his good friend Eric Simmons spotted that ad on Craigslist. It was posted by a man who says he found the dog off of Taylor Road. 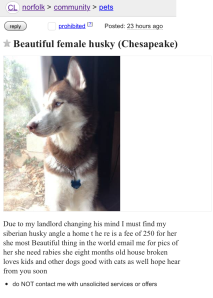 “He said a woman came and claimed her so he gave us all of her information,” King explained.

But, he says when he later found Collaren’s ad on Craiglist listing a Siberian Husky for sale, he put two and two together.

He took action and called Colleran pretending to be an interested buyer. He says he agreed to meet her on Sunday in a park in the Cradock area of Portsmouth.

What Colleran didn’t know is that Portsmouth Police and Chesapeake Animal Control would also be there.

“She’s like no, no the person gave me the dog and she just kept saying that over and over,” King described.

King says animal control officers were able to scan Nikita for her microchip and verify she belonged to him.

“She’s had a lot of issues like medically. That’s what was freaking me out the most,” King said.

Colleran was taken into custody and charged with obtaining property under false pretenses. She is currently being held in the Chesapeake Correctional Center.

Debate quiz: Who said it? Biden or Trump?

NASHVILLE, Tenn. (NEXSTAR) -- Now that the final debate between President Donald Trump and Democratic rival Joe Biden is over, we want to see how closely you listened to the candidates and whether you can determine who said what.

Searches for ‘When does the debate end’ spike 3,000 percent as candidates wrap up final confrontation

(NEXSTAR) - Election fatigue is real, and we saw clear evidence of that Thursday night as President Donald Trump and former Vice President Joe Biden went slightly over their allotted 90 minutes for the second and final debate of the 2020 campaign.

Google Trends - which monitors the volume of inquiries on the search engine - tweeted just after the planned 7:30 pm stop time that searches for "when does the debate end" had spiked 3000 percent.

In less than two weeks we will know if the school district will receive funding to start improving the student learning environment.

Debate quiz: Who said it? Biden or Trump?

Searches for ‘When does the debate end’ spike 3,000 percent as candidates wrap up final confrontation

Who won the Trump-Biden debate? 6 key moments from the final showdown

Kid Rock, golfer John Daly asked to mask up in the audience at final presidential debate

Who is Kristen Welker? Meet the moderator of the final US presidential debate

How will muting work during Trump-Biden debate?

These 5 states are most at risk of election-time violence from militias, report finds

Who won the Trump-Biden debate? 6 key moments from the final showdown

Greensboro woman told to pay back nearly $15,000 in unemployment benefits

Man splits $5M jackpot … with himself after accidentally buying 2 tickets