MONETA, Va. — The shooter believed to have killed a Roanoke-based WDBJ reporter and photographer and shoot a third person Wednesday morning during an on-air live interview posted tweets of the shooting — including video of the shooting. Twitter has since suspended the account. FOX8 will not be showing the video out of respect for the victims. 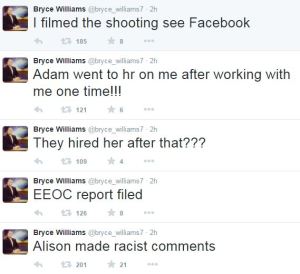 In the Tweets, video clearly filmed by Flanagan (his Twitter account name was Bryce Williams) shows him aiming a gun at WDBJ reporter Alison Parker and firing. The video stops before all of the shots are fired. Photographer Adam Ward also was killed.

In additional Tweets Flanagan accused Alison of making racist comments and said “They  hired her after that!?” In another Tweet he accused Adam of going to “hr on me after working with me one time!”

Parker’s father, Andy, told the Washington Post he was horrified to learn that the gunman had filmed the shooting and posted footage of it online.

FOX8 has learned that Flanagan filed a racism complaint against WDBJ.

His LinkedIn account states that he began his career as a news intern in 1993, before working as a reporter and production assistant at various stations in the 1990s.

ABC News is reporting that they have received a 23-page fax from someone claiming to be Bryce Williams. The document has been handed over to investigators, ABC said.

Parker was interviewing and Ward was filming during a live television report at Smith Mountain Lake in Moneta, Virginia. The shooting happened at about 6:45 a.m.

Flanagan shot himself after being confronted by authorities on Interstate 66 in Virginia. He was flown to the hospital and died at approximately 1:30 p.m.

#Correction: Our ND hired and fired VA shooting suspect in FL in 2000. Fired for bizarre behavior and threatening employees. @SanDiego6

Before picking up the conventional bouquet or box of chocolates, here are seven Valentine’s Day gifts that will be the most popular in 2023.

No matter which wine you’re looking for this Valentine’s Day, from cabernet to pinot grigio, you’ll be able to find it online.

Since a romantic meal is the focal point for many couples on Valentine’s Day, having the best table decorations is crucial to creating the proper mood.