Skip to content
Breaking News
Breaking News
School closings and delays
This is an archived article and the information in the article may be outdated. Please look at the time stamp on the story to see when it was last updated.

GUILFORD COUNTY, N.C. — The sound of Ed Regensburg's replacement iPhone rang loudly, interrupting the sound effects he had begun to make with his mouth to mimic the sound of the parachute deploying from his plane.

“I’m sorry,” he said as he reached into his pocket. He explained that his old phone was at the bottom of the ocean. “I left it on the plane!”

His replaced phone had been ringing constantly since his and Dan Tucker’s rescue was filmed and shared with the world. It was now Thursday, just two days after their brush with death.

Ed and Dan Tucker were sitting next to each other inside Dan’s family dining room. Their backs were sore, their eyes were heavy from lack of sleep, and their skin was freshly kissed by the sun. Ed’s skin appeared more sunburnt than Dan’s, but they both complained of the chapped lips they had gotten from being stranded in the ocean for two hours.

Tuesday morning, pilots Ed and Dan wrapped up their weeks-long diving vacation in the U.S. Virgin Islands, and began the long journey back to Greensboro. The two pilots, with thousands of hours of combined pilot experience, were traveling in Ed’s Cirrus SR22.

“It’s the most amazing plane there is,” Ed explained. He went on to say that all of his planes have been Cirrus planes, and that his next plane will be one as well.

Two hours into the flight from St. Croix to Providenciales, Caicos Islands, they began to experience a malfunction.

“The yellow light lights up and it says low oil pressure,” Ed described as he scratched his eyebrow, making sure to avoid the part of his forehead that had become exposed to the unforgiving sun. 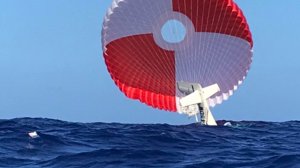 They were 8,000 feet in the air and miles away from land.

“About 15 seconds,” Dan said is all it took from their oil gauge to drop from 30 to 6 pounds of pressure. It was at that moment that Ed declared an emergency.

It was in that moment that the engine began to violently shake the hull of the plane.

“Pretty much the bottom fell out,” Ed said.

The propeller stopped in mid-air.

“At that time, pilot training took over,” Dan said.

The two men would spend the next 20 miles trying to coast to the nearest island, while also dropping from 8,000 feet to 1,500 feet.

The two men credit their survival to a number of things, including the plane’s parachute Ed had installed when he bought it years ago.

Ed mimics the sound of the parachute shooting out of the top of the plane.

The parachute whips the back of the plane up, and snaps the nose of the plane forward. “It was like the bungee pull from Hell.”

The plane leveled out before hitting the water where it would float, right-side up for another 20 minutes before going underwater.

Ed explained that had he not had a parachute, there was a high probability that the plane would have flipped upside down when it landed on the rough waters.

Dan and Ed escaped on a small life raft where they waited for help.

“It was at least 30 minutes before we saw the Coast Guard airplane,” Ed explained. “That first 30 minutes, there was no airplane, there was no ship. You’re out there in the middle of nowhere…That’ll leave a hole in the bottom of your stomach, a sickening feeling.”

It would be another two hours after the plane spotted them in the water before a nearby Regal Princess cruise ship could get to them and perform a rescue.

Ed had become motion sick and had sunk to the bottom of the life raft. Dan’s eyes were peeled on the horizon for signs of help. “I looked off into the distance and I saw this ship, and I said, 'Ed, there’s a cruise ship coming.'”

Both men laughed at this part in the retelling of this story. This is the 1,028th time they had to tell it to someone, and they both remember the thought that passed through their minds at this moment.

It was not one of relief but, "after all we’ve been through, I hope they don’t run over us.”

A rescue boat was deployed from the cruise ship as hundreds of passengers watched from the side of the ship. Several holding cell phones to capture the miraculous moment.

Once on the ship, both men were given medical treatment and had a chance to call their loved ones.

Dan called his wife, who was shocked to hear what had happened.

“As soon as he said the plane went down, I was honestly stuck on 'the plane went down,'" Jana Tucker explained. “I I just couldn’t believe it. But again, just so thankful that I was talking to him and hearing his voice and knowing that he was OK.”

She said she began to pray to God and thanked him for bringing her husband home safely.

Ed called his brother who was traveling overseas in Spain at the time. He then called his girlfriend.

“I sat for 45 minutes in my car in the parking lot in disbelief,” Lisa Sherman described. “He’s my blessing. . . in a lot of ways. And God has a purpose for us. We’ve been through a lot and survived it and lived to tell. It’s just affirmation that he’s mine, my blessing.”

Late Wednesday evening the two men landed in Greensboro where they met with Jana and Lisa in a private, small ceremony. Not one filled with cheers and banners, but one filled with silence as they held each other and pushed out the thought of what could have happened.

After retelling their journey of survival for the 1,029th time, Ed and Dan slipped away into the kitchen and began to plan their next adventure. Plane parachute included.

“It was nerve-wracking because it’s that feeling of, that one vote that can count, it just gets your nerves all worked up, but it was fun,” Kearns High School senior Christian Miller said.

GRAND MEADOW, Minn. -- Glen Davis was arguably the best-known driver in all of Grand Meadow, Minnesota.

For 55 years, residents of his small town of 1,170 trusted him to bus their children to and from school. He was proud to say he'd never once gotten in an accident.