WASHINGTON — The Supreme Court denied a request Wednesday from North Carolina to allow provisions of its controversial voting rights law to go back into effect.

In a 4-4 split, justices left undisturbed a lower court opinion that struck down the law.

The Supreme Court’s order means provisions of the law — concerning a tightening in voter ID requirements, cutbacks on early voting and the preregistration of 16-year-olds — will remain off the books for November’s election.

The court’s order is a major victory for challengers to the law, including civil rights groups and the Department of Justice, which argued that it had a disparate impact on minority voters. In July, a three-judge panel of the Fourth Circuit Court of Appeals held that provisions of the law targeted “African-Americans with almost surgical precision.”

Hillary Clinton tweeted that the ruling was “great news.” “Let’s make voting easier so every voice in our democracy can be heard,” she wrote.

North Carolina was seeking to freeze the lower court opinion pending appeal. In court papers, lawyers for the state argued that the appellate decision would cause confusion “mere months” before a general election.

“North Carolina has been denied basic voting rights already granted to more than 30 other states to protect the integrity of one person, one vote,” he said.

The state’s lead lawyer, Paul Clement, said in briefs filed with the Supreme Court that the appeals court’s decision was “extraordinary” and argued, for example, that the appeals court “prohibited North Carolina from enforcing a voter ID law that is actually more sensitive to disparate impact concerns than those in force in many of its sister states.”

Citing the approaching date of the election, Clement asked the court only to reinstate three provisions of the law before the next election. The law requires voters to present any of eight different forms of identification. It reduced early voting from a 17-day period to 10 days and it eliminated the state’s “preregistration” practice, which allowed 16-year-olds to preregister even if they would not be eligible to vote in the next election.

In court briefs, challengers to the law had argued that the appeals court opinion would not disturb the election because the state had already taken steps to implement the decision including an online posting detailing the appeals court decision and reiterating that no photo ID would be required in the election.

The groups and the Obama administration said the lower court opinion had been carefully crafted, and urged the Supreme Court to leave it undisturbed for now.

The court’s 4-4 divide in the order could signal that it might also deadlock in other voting rights cases currently percolating in the lower courts and give ammunition to those asking Senate Republicans to hold hearings for a ninth justice. 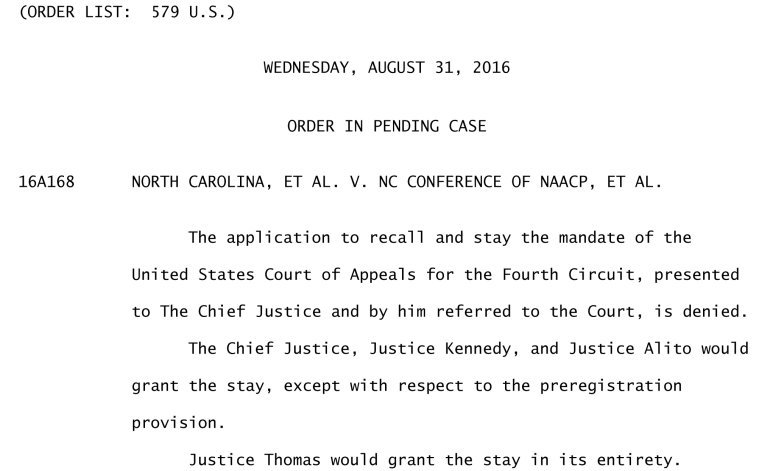 The saying goes: "If the shoe fits, wear it!"

If you're artsy, craftsy or creative in your own way, a local animal rescue wants to give you some shoes to try. Horseshoes, that is!

Horse Education Rescue Organization, or H.E.R.O., is looking for local artists to donate to their art auction to be held on Dec. 12. The only catch? Your work, whether it’s painting, drawing, or sculpture, has to have a horseshoe in it.

GREENSBORO, N.C. -- A man is dead and a woman has been charged with driving while impaired, according to Greensboro police.

At about 11:50 p.m. Tuesday, police responded to a crash on East Market Street.

HOUSTON (AP) — Sitting across from her lawyer at an immigration detention center in rural Georgia, Mileidy Cardentey Fernandez unbuttoned her jail jumpsuit to show the scars on her abdomen. There were three small, circular marks.

The 39-year-old woman from Cuba was told only that she would undergo an operation to treat her ovarian cysts, but a month later, she's still not sure what procedure she got. After Cardentey repeatedly requested her medical records to find out, Irwin County Detention Center gave her more than 100 pages showing a diagnosis of cysts but nothing from the day of the surgery.

Soldier surprises his kids with early homecoming at Northland school

Cracker Barrel set to add these alcoholic drinks to its menus

Cash App scam could wipe out your bank account

Archdale man arrested, charged with exploitation of a minor