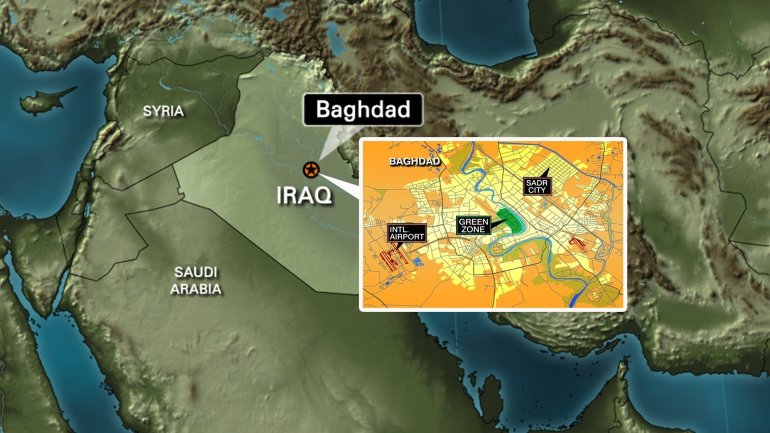 BAGHDAD — Two rockets landed inside the heavily fortified Green Zone in Baghdad, home of the US Embassy in Iraq, on Wednesday afternoon, according to the Iraqi military.

The Iraqi joint military command told CNN in Baghdad that “two Katyusha rockets landed inside the Green Zone in Baghdad. No reports of casualties.” The incident took place just after midnight local time.

The CNN team in Baghdad heard sirens from inside the Green Zone and two explosions. It was not immediately clear who had fired the rockets or where they were fired from.

The rockets landed a day after Iran fired more than a dozen missiles at Iraqi bases housing US troops. The attack on Tuesday from Iran did not cause any US or Iraqi casualties.

In response to the Iranian attack, President Donald Trump said on Wednesday that it appeared the Islamic Republic “appeared to be standing down,” but three US officials told CNN that the US currently assess that Iranian proxy forces in the region are still a threat.

One defense official said that a reason for the concern is the fact that subordinate commanders of Iranian backed militias are not highly disciplined. The source said Iranian Gen. Qasem Soleimani — who was killed in an American air strike last week — personally worked to keep those forces in line. It is unknown to US officials if Soleimani’s successor can keep things under control.

The Green Zone is an area of Iraq’s capital city where the embassies for the US and several other western countries are located. It was initially carved out of central Baghdad by US-led forces after their invasion of Iraq in 2003 and is largely viewed as a safe location, despite frequently being the target of rocket attacks.

Last week the US embassy in Baghdad was the site of mass protests in response to US airstrikes on an Iranian-backed militia group at the end of last month.

Those strikes were launched in retaliation to attacks by an Iranian-backed Shia militia group known as Kataib Hezbollah, which had injured numerous American military personnel, according to US officials.

WINSTON-SALEM, N.C. -- In the day-to-day rush to get to where we need to be, it’s rare that someone stops to think about what’d beneath their favorite routes. But, not long ago, Forsyth County Public Library North Carolina Room Historian Fam Brownlee realized people were curious about what’s below Winston-Salem. He also realized he didn’t have the answers they were seeking, so he started looking into it.

“We’ve dug, and dug, and dug and I’m not talking about digging in the ground,” Brownlee said.

KERNERSVILLE, N.C. -- Firefighters were called to a fire at an industrial building in Kernersville on Monday night.

The fire was at TexTech Coatings, located at 215 Drummond St.

HERRIMAN CITY, Utah – A Utah paint shop that specializes in motorcycles and classic cars has designed a customized casket for a fallen police dog.

Hondo, a K-9 with Herriman City's Police Department, was shot while assisting officers apprehending a fugitive in Salt Lake City on February 13. Hondo suffered a gunshot wound to the sternum and died at a nearby veterinary hospital.