Tropical Storm Nestor is churning in the Gulf of Mexico and could impact the Carolinas over the weekend.

As of the 5 p.m. Friday advisory from the National Hurricane Center, Nestor is 280 miles southwest of Panama City, Florida, moving northeast at 22 mph.

The storm is expected to continue to move northeast through Sunday, followed by a turn to the east-northeast by early Monday.

On the forecast track, the center of Nestor will approach the northern Gulf Coast later today and tonight and move inland across portions of the southeastern United States Saturday and Sunday as it becomes a post-tropical cyclone.

Nestor is expected to move offshore of the coast of North Carolina into the western Atlantic by late Sunday.

Gale-force winds are likely along portions of the Atlantic coast of the southeastern United States by Saturday.

Nestor is expected to produce total rainfall accumulations of 2 to 4 inches this weekend from the central Gulf Coast and northern and central Florida to the eastern Carolinas, with isolated maximum amounts of 6 inches.

A Tropical Storm Warning is in effect for:

A Storm Surge Warning is in effect for:

The Myrtle Beach Mini Marathon scheduled for this weekend has been canceled due to the threat of severe weather, WMBF reports. 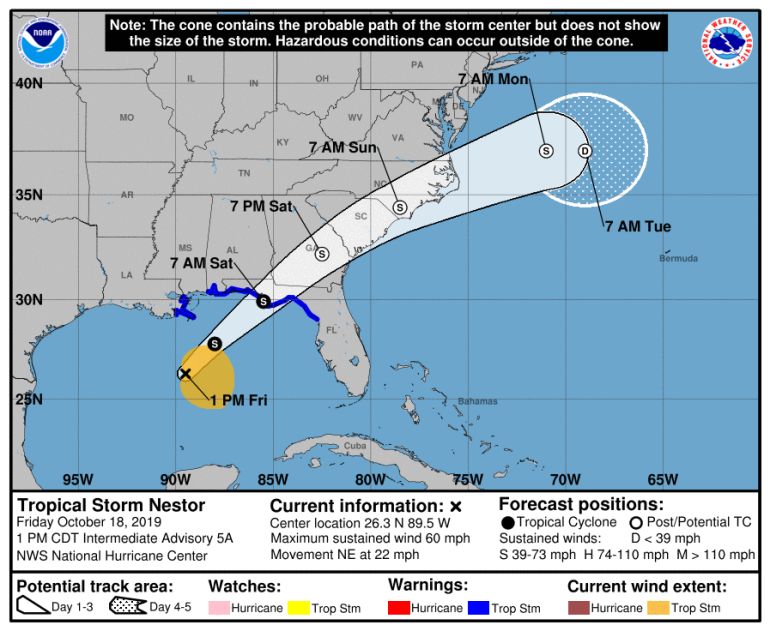 MYRTLE BEACH, SC (WBTW) – The City of Myrtle Beach has clarified some of its ordinance that prohibits short-term rentals, particularly about individual owners.

With respect to units owned by private individuals, the new amendment makes the following clarifications:

Before just a few weeks ago, Stuart and Adrian Baker were perfectly healthy.

The inseparable couple had been married for more than 51 years and were living in Boynton Beach, Florida, in retirement. Neither of them had any serious health conditions. Then in mid-March, they started feeling ill.

If washing your hands to the "Happy Birthday" song is getting old, enjoy this video of Dwayne "The Rock" Johnson and his daughter.

The 47-year-old "Fast and the Furious" actor posted a video on Instagram of his new "sheltering at home" ritual before taking a shower – washing hands with 1-year-old Tiana while singing part of "You're Welcome" from the movie "Moana."

How to make a homemade face mask, with or without sewing

Number of coronavirus cases in North Carolina tops 2,200; here’s a county-by-county breakdown of cases in the Piedmont Triad

Woman taken into custody after standoff in Davidson County