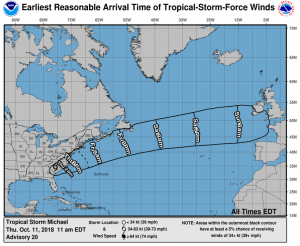 It's at the border.

At 11 a.m, the National Hurricane Center reported that the storm was only 35 miles south-southeast of Charlotte.

Only about 10 miles separate the eye from the border, according to GPS coordinates, which the storm can cover quickly as it moves in at 23 mph.

Already, Michael is bringing "heavy rainfall and tropical-storm-force wind gusts over much of central and eastern South and North Carolina," the NHC reports.

The NHC adds that tornadoes are possible through Thursday evening across central and eastern North Carolina and southeast Virginia.

The NHC expects the storm to continue through central and eastern North Carolina through Thursday before moving into southeastern Virginia Thursday evening.

By Thursday night, the storm is expected to be in the western Atlantic Ocean.

The devastating storm made landfall as a Category 4 hurricane near Panama City, Florida, around 1:15 p.m. Wednesday and is now cutting through the southern states.

On its course, the storm will continue picking up speed through Thursday night before turning east-northeast. It's anticipated to pick up more speed on Friday

Over land, Michael may weaken some before intensifying late Thursday night or early Friday over the Atlantic. 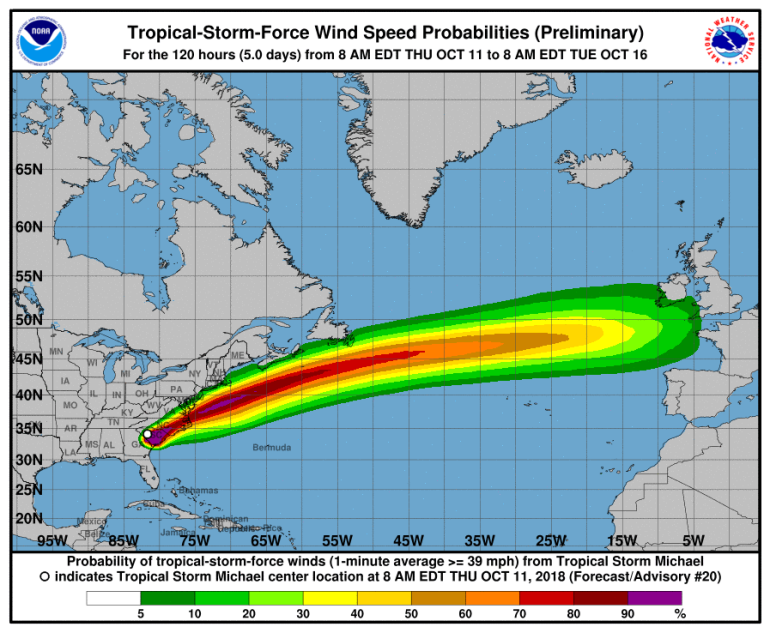 An 11-year-old girl was killed in Seminole County, Georgia, after a mobile carport was lifted off the ground, slammed through a roof and hit the child, WALB reports.

Crews managed to get to the child by about 1:50 a.m. Thursday morning.

On Wednesday, Michael claimed another life when a man died after a tree fell on a home near Greensboro, Florida, the Gadsden County Sheriff's Office said.

People are anxious to get the coronavirus vaccine and it's proving to be difficult to find out how and when they are going to get the shot.

People waited hours on the phone to get an appointment and now they are driving hours to secure a spot.

LEXINGTON, N.C. — Art has always been a part of Kernick Jobe life.

GREENSBORO, N.C. -- COVID-19 has given a lot of us time to think about things. For many, those thoughts have turned into anxiety and it’s caused more people to reach out for support.

As a result, college counselors in the Triad have said it has caused an influx of students to be in need of their resources.

Limited doses of COVID-19 vaccine getting to Davidson County

All border wall construction projects must stop by Wednesday, contractors are told

First US case of Brazilian COVID-19 variant found in Minnesota

Periods of Rain and Fog Precip: 81%

Biden explains how he arrived at $1,400 stimulus check amount

Third stimulus checks: Here’s what is holding up those $1,400 payments