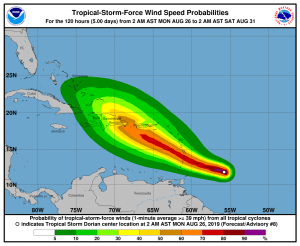 Tropical Storm Dorian is churning just east of the Lesser Antilles today and could turn into a hurricane by Tuesday.

There were tropical storm warnings for Barbados, St. Lucia and St. Vincent and the Grenadines on Monday and tropical storm watches for Dominica, Martinique and Grenada and its dependencies, the center said..

Swells generated by the storm around the Lesser Antilles on Monday could cause life-threatening surf and rip current conditions, the center said.

The storm’s path and threat

Dorian is a “small tropical cyclone,” the center said, with tropical-storm-force winds that extend outward for up to 45 miles from its center. Later Monday, that center will be near the Windward Islands.

Dorian’s maximum sustained winds have bumped up to 60 mph, the center said, and are expected to slowly strengthen.

“Dorian could be near hurricane strength on Tuesday and Wednesday while it is over the eastern Caribbean Sea,” the center said.

As it moves west, it will be battling wind shear and dry air, two hurricane killers, Cabrera said. Reliable models show the storm weakening and dissipating before arriving in Puerto Rico and Hispaniola. If the storm manages to overcome the hostile conditions and intensifies, both Puerto Rico and the Dominican Republic will face a hurricane threat by midweek.

Dorian could turn into a Category 1 Hurricane

Dorian, the fourth named storm of the hurricane season, will be approaching Puerto Rico by Wednesday evening. Puerto Ricans, with fresh memories of the 2017 disaster, have been bracing for what Dorian may look like.

Nearly two years ago, the island was slammed by Hurricane Maria, which unfurled death and devastation and left nearly the entire island without power.

This week’s tropical storm is expected to turn into a Category 1 hurricane while it’s in the vicinity of Puerto Rico, Maginnis said.

“Thankfully I’ve been preparing since May,” she said, noting that her family has been stocking up water, canned food and gas.

The line for water stretched from the entrance to the back storage area, she said.

The National Hurricane Center says while it’s too soon to determine the magnitude or possible impacts of Dorian on Puerto Rico, the Virgin Islands or Hispaniola, those areas should continue to monitor the storm’s progress.

Generally, hurricane season reaches a peak in the eight weeks around September 10. Two-thirds of all the storms produced in a typical season occur during this period.

Costco plans to bring back free samples in June

GREENSBORO, N.C. -- The Greensboro Police Department is investigating following the death of a man who was hit while crossing Pisgah Church Road, according to a GPD news release.

Around 4:32 a.m., Luther Gilmer, 64, of Greensboro attempted to walk across Pisgah Church Road near North Church Street while not at a cross walk.

MINNEAPOLIS -- A CNN crew was arrested while on the air covering the Minneapolis protests Friday morning.

Correspondent Omar Jimenez was reporting live on CNN shortly after 5 a.m. local time when he, along with producer Bill Kirkos and photojournalist Leonel Mendez, were taken into custody. The video continued as the three were led away by Minnesota State Patrol officers in body armor.

GREENSBORO, N.C. -- Greensboro police say they have identified the victim killed in a shooting on Glendale Drive.

Xavier Isaiah Jabbar Torrence, 21, of Greensboro, was found around 1:30 a.m. Friday when officers responded to a shooting on the 100 block of Glendale Drive.

Photos: Riots erupt in Minneapolis, other cities over death of George Floyd

Times of sun and clouds Precip: 50%