AURORA, Ill. — There has been a possible break in the case of a missing Illinois boy last seen in Wisconsin with his mother eight years ago.

An Ohio police report obtained by WITI said on Wednesday, that officers found a 14-year-old boy who told police his name was Timmothy Pitzen. He said that he had just escaped from two kidnappers that had been holding him for seven years. 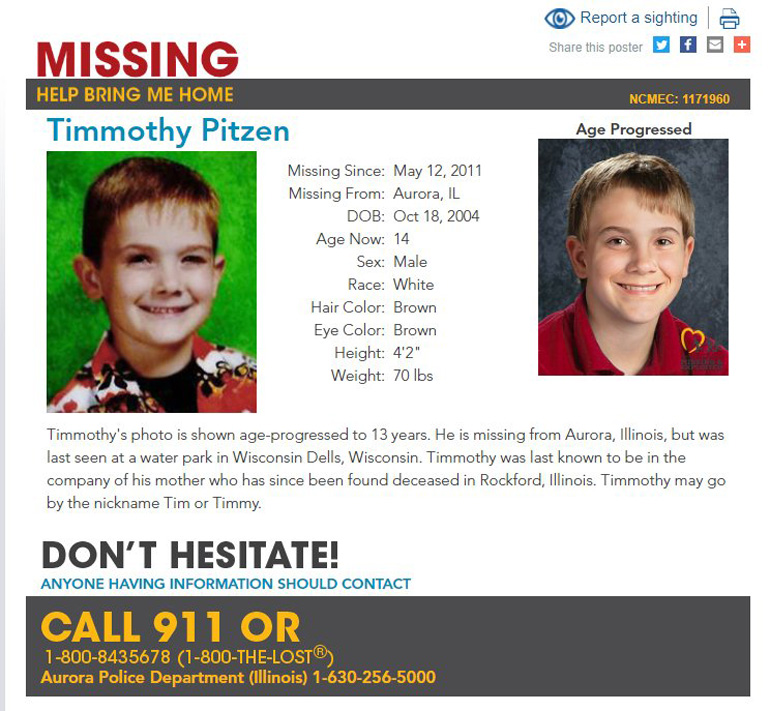 Timmothy Pitzen is the only child currently missing from Aurora, according to the National Center for Missing and Exploited Children.

Surveillance video captured the boy with his mom, Amy Fry-Pitzen, in Wisconsin Dells, Wisconsin. Investigators said she picked him up from school in Illinois and took him to the zoo and to Wisconsin Dells. She was later found dead in a hotel room in Rockford, Illinois.

Authorities said she killed herself and left a note saying Timmothy Pitzen was safe and being cared for by someone who loved him -- but he would never be found.

Police have said in the past there was no evidence Fry-Pitzen harmed the boy -- and they believed he was still alive. Timmothy Pitzen would be 14 years old now.

The boy who spoke to authorities described the two men as white males with body builder-type figures. One had black, curly hair, wore a Mountain Dew shirt and jeans and had a spider web tattoo on his neck. The other was short and had a snake tattoo on his arms.

He said the vehicle they were in was a newer model Ford SUV with unknown Wisconsin license plates, with a second row – white in color with yellow transfer paint and a dent on the left back bumper.

The boy indicated he escaped and kept running across a bridge into Kentucky. He said they had been staying at a Red Roof Inn, but he had no idea where.

Louisville FBI officials tweeted Wednesday that they are currently working with national and local authorities in Cincinnati, the Hamilton County Sheriff's Office and police in Aurora and Newport, Kentucky.

Police are working to determine the boy's identity, and figure out who the alleged kidnappers might be.

FBILouisville and @FBICincinnati are actively coordinating with the Newport PD, @CincyPD, Hamilton County Sheriff’s Office, and @AuroraPoliceIL on a missing child investigation. There will be no further statement made on this matter until we have additional information.

HIGH POINT, N.C. --  The Fourth of July will not be filled with the usual red, white and boom of professional fireworks, parades and parties.

The coronavirus is forcing people to get creative with their celebrations.

RALEIGH, N.C. — North Carolina churches with schools on their property may not be able to allow attendees with concealed carry permits to be armed outside of school hours.

Gov. Roy Cooper vetoed the bill on Thursday to prevent the increased access to handguns.

MOUNT RUSHMORE, S.D. (KELO) -- For the first time since 2009, fireworks are planned over Mount Rushmore.

Man killed after being shot and run over by car; juvenile girl charged with murder

Driver facing charges after killing man, dog on walk in Charlotte; neighbors say speeding has been an issue

As schools consider reopening in the fall, busing becomes a concern

Man killed after being shot and run over by car; juvenile girl charged with murder