Skip to content
Watch Now
Watch Now
FOX8 10:00 News
This is an archived article and the information in the article may be outdated. Please look at the time stamp on the story to see when it was last updated. 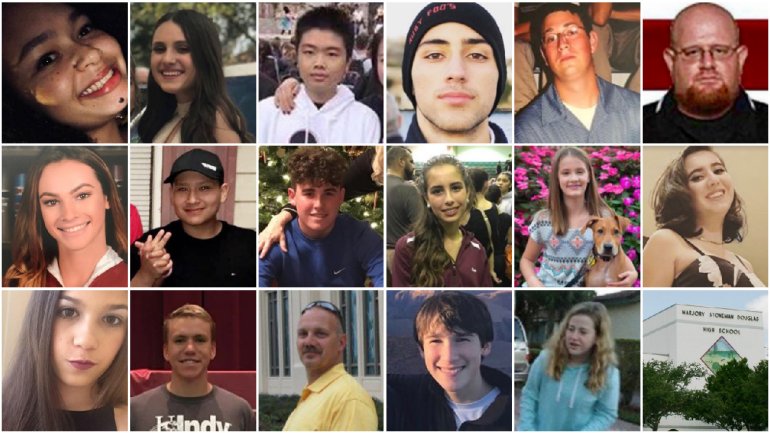 They are among the 17 people killed by a gunman at Marjory Stoneman Douglas High School in Parkland, Florida, on Wednesday.

Broward County Sheriff Scott Israel said Thursday that all families who lost loved ones in the shooting have been notified.

Here are the victims:

Alyssa, 14, was a student at Stoneman Douglas and a soccer player for Parkland Travel Soccer.

Lori Alhadeff, Alyssa’s mother, told HLN she dropped her daughter off at school Wednesday and said “I love you.” When Lori Alhadeff heard about the shooting, she hustled to school, but was too late.

“I knew at that point she was gone. I felt it in my heart,” she said. “Alyssa was a beautiful, smart, talented, successful, awesome, amazing soccer player. You’ll be greatly missed, Alyssa. We love you so much. You’ll always, always be in our hearts.”

“Alyssa Alhadeff was a loved and well respected member of our club and community,” Parkland Travel Soccer said on Facebook. “Alyssa will be greatly missed.”

“On behalf of the entire Coleman community, we offer heartfelt condolences and prayers for comfort to Alyssa’s family and friends. May Alyssa’s memory forever be for a blessing,” the camp said on Facebook.

Beigel, a geography teacher, was killed as he tried to usher students back into his classroom when the shooting broke out.

Kelsey Friend, one of Beigel’s students, told CNN in an emotional interview that he was shot outside the classroom door and that he saved her life.

“Mr. Beigel was my hero and he still will forever be my hero. I will never forget the actions that he took for me and for fellow students in the classroom,” Friend said. “I am alive today because of him.”

She said the teacher was an amazing person and his memory would live on with her.

“If I could see him right now … I’d give him a huge teddy bear to say thank you. But, unfortunately, I can’t do that,” she said.

Beigel was also a counselor at Camp Starlight in Pennsylvania, which called him a “friend and hero” on Facebook.

Duque was a freshman at the school. He was named as a victim of the shooting by Broward County Sheriff Scott Israel at a news conference.

Martin’s brother Miguel described Martin this way on a donation page: “He was a very funny kid, outgoing and sometimes really quiet. He was sweet and caring and loved by all his family. Most of all he was my baby brother. My family and I have no words to describe the event that’s has happened on this date, all my prayers to the lost ones. My family and I will appreciate anything that we can get helped with. R.I.P Martin Duque.”

Dworet, a senior, was killed in the shooting, the University of Indianapolis confirmed. Dworet was recruited for the university swim team and would have been an incoming freshman this fall.

“Nick’s death is a reminder that we are connected to the larger world, and when tragedy hits in places around the world, it oftentimes affects us at home,” said Robert L. Manuel, University of Indianapolis president.

“Today, and in the coming days, I hope you will hold Nick, his family, all of the victims, as well as the Parkland community and first responders in your prayers.”

Feis, the assistant football coach, was killed when he threw himself in front of students to protect them from oncoming bullets, according to football program spokeswoman Denis Lehtio. He suffered a gunshot wound and died after he was rushed into surgery, Lehtio said.

“He died the same way he lived — he put himself second,” she said. “He was a very kind soul, a very nice man. He died a hero.”

Colton Haab, a 17-year-old junior who had a close relationship with Feis, told CNN he saw the coach running toward the sounds of gunshots.

“That’s Coach Feis. He wants to make sure everybody is safe before himself,” Haab said.

“(He) made sure everyone else’s needs were met before his own. He was a hard worker. He worked after school, on the weekends, mowing lawns, just helping as many people as possible,” Haab added.

Chad Lyons, a student and football player, said Feis was there for him when Lyons was going through leukemia treatments.

“He was just an amazing person to be led on and taught by, and I’m thankful enough to even be in his presence, just going through high school.”

It is with Great sadness that our Football Family has learned about the death of Aaron Feis. He was our Assistant Football Coach and security guard. He selflessly shielded students from the shooter when he was shot. He died a hero and he will forever be in our hearts and memories pic.twitter.com/O181FvuHl3

“My heart is broken. Yesterday, Jennifer Bloom Guttenberg and I lost our baby girl to a violent shooting at her school. We lost our daughter and my son Jesse Guttenberg lost his sister.

“I am broken as I write this trying to figure out how my family gets through this. We appreciate all of the calls and messages and we apologize for not reacting to everyone individually,” he added. “Hugs to all and hold your children tight.”

Skidmore College, where Fred Guttenberg attended, released a statement saying their hearts go out to Jaime’s parents and others affected by the tragedy.

“There really are no words to lessen the suffering that the families of victims are feeling at this moment, but perhaps knowing that we stand with them can provide some small measure of solace,” the college said.

Hixon, the athletic director for the school, has been reported dead, according to Denise Lehtio, the communications director with the school’s varsity and junior varsity football program.

Lehtio told CNN that the football coach at Douglas told her Hixon was shot and killed.

RIP Chris Hixon. I left Douglas to take a job at a rival school. I came back to watch a lacrosse game to find Chris running the ticket gate. He shook my hand, asked how I was, let me in for free and said “once an Eagle, always an Eagle.” #DouglasStrong pic.twitter.com/71g8Ct1jLs

Hoyer was named as a victim of the shooting by Broward County Sheriff Scott Israel.

“He was a good kid. He never got in trouble,” Hoyer’s grandmother Janice Stroud told WYFF-TV.

Loughran was named as a victim of the shooting by Broward County Sheriff Scott Israel.

A neighbor of Loughran shared a post on Facebook saying, “You will be greatly missed, and we will always love you and celebrate your beautiful life.”

Montalto was a freshman who served on the school’s winter guard team. She had been reported missing after the shooting and confirmed dead late Wednesday night.

Oliver was born in Venezuela and moved to the United States when he was 3 years old and became a U.S. citizen in January 2017. His girlfriend confirmed he died in the shooting.

Petty’s family confirmed her death and released a statement to LDS Living that said in part: “It is impossible to sum up all that Alaina was and meant to her family and friends. Alaina was a vibrant and determined young woman, loved by all who knew her. Alaina loved to serve. She served her community through her participation in the Marjory Stoneman Douglas JROTC program and her countless hours of service as a volunteer for the Helping Hands program of The Church of Jesus Christ of Latter-day Saints.”

Alaina Petty was in her school JROTC program and volunteered for the “Helping Hands” program of the Church of Jesus Christ of Latter-day Saints. pic.twitter.com/ORFYbY5eiC

Pollack was a senior at the school. She planned to attend Lynn University.

“She was a beautiful, warm, loving and intelligent soul whose sense of humor and loyalty to friends made her beloved by all who knew her,” a donation page says of Pollack.

“My family lost an absolutely beautiful member today,” Curtis Page Jr. posted on Facebook about Helena Ramsay, who was 17 when she died.

“My family lost an absolutely beautiful member today, due to a senseless school shooting.”

Schachter was a freshman marching band student. His death was confirmed by his former instructor, according to the Miami Herald.

This is 14 year old Alex Schachter. I went to high school with his father. He died yesterday. My heart breaks for his family. I have no words. pic.twitter.com/oabXa3w2kx

Schentrup was a 2017 National Merit Scholar semifinalist. She was confirmed dead by friends Thursday morning.

Wang was a 15-years-old and in the school’s ROTC program. He was confirmed dead by family members on Thursday.

“He is so funny, caring and selfless,’’ Lin Chen, Wang’s 24-year-old cousin, told the Sun-Sentinel.

Chen said a friend of his told her Wang was holding a door to let other students out before him.

CNN contributed to this story.

KERNERSVILLE, N.C. -- Firefighters were called to a fire at an industrial building in Kernersville on Monday night.

The fire was at TexTech Coatings, located at 215 Drummond St.

HERRIMAN CITY, Utah – A Utah paint shop that specializes in motorcycles and classic cars has designed a customized casket for a fallen police dog.

Hondo, a K-9 with Herriman City's Police Department, was shot while assisting officers apprehending a fugitive in Salt Lake City on February 13. Hondo suffered a gunshot wound to the sternum and died at a nearby veterinary hospital.

The Dow Jones Industrial Average slumped more than 1,000 points Monday in the worst day for the stock market in two years as investors worry that the spread of a viral outbreak that began in China will weaken global economic growth.

Traders sought safety in U.S. government bonds, gold and high-dividend stocks like utilities and real estate. The yield on the 10-year Treasury fell to the lowest level in more than three years.