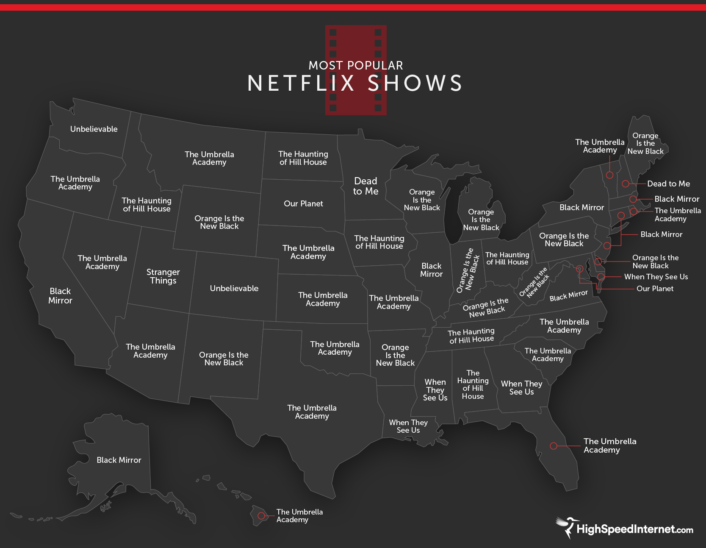 When it comes to the most popular Netflix series of 2019, North Carolina isn’t alone.

A new report from HighSpeedInternet.com put the debut season of Netflix’s “The Umbrella Academy” at the top of the list, ranked based on search volume and Google Trends data, not only for North Carolina but the United States as a whole as well.

“The Umbrella Academy” is based on the comic series by Gerard Way, better known as the frontman of rock band My Chemical Romance, and Gabriel Bá.

The 10-episode debut season offered up our first live-action look at the Hargreeves family, a group of unrelated superpowered people all brought together as children by Reginald Hargreeves, a billionaire driven to create a team of superheroes.

In addition to North Carolina, the show also claimed the number-one spot for 14 other states.

Following close behind, “Orange is the New Black,” which closed out its seventh and final season in July, topped charts for 11 states.

“Black Mirror” and “The Haunting of Hill House” gave chills in 2019 and became favorites in eight and six states respectively, according to the report.

Other shows to make the list of state favorites were “Unbelievable,” “Stranger Things,” “Our Planet,” “When They See Us” and “Dead To Me.”

EL PASO, Texas (Border Report) -- Schools are closed and children are spending more time than ever connected to the internet on laptops, tablets and mobile devices.

But so are adults who may be prowling the worldwide web with the intent of exploiting these children, federal investigators say.

Some doctors moving away from ventilators for virus patients

Beyond the symptoms, doctor breaks down what COVID-19 does to the body

Windy with a mix of sun and clouds Precip: 30%

US coronavirus cases top 402,000, with more than 13,000 deaths. But future projections are better than expected