SACRAMENTO, Calif. -- Authorities are now reporting another suspicious package addressed to Sen. Kamala Harris (D-Calif.), moments after a man was arrested in the string of bombs mailed to high-profile Democrats, according to CNN.

“We are investigating reports of a suspicious package in South Sacramento,” Sacramento County Sheriff’s Department Sgt. Shaun Hampton said, according to The Sacramento Bee. “It resembles the ones that have been reported throughout the country.”

"We're told at this hour that authorities in Sacramento, California, are investigating a package that was addressed to Senator Kamala Harris," reports CNN's @evanperez "They have to identify it, they have to make sure it looks like the other packages" https://t.co/fQwJkSYW2x pic.twitter.com/0vcB4oHrIc

The man was arrested in South Florida. The man who was taken into FBI custody is in his 50s, has a criminal history and has ties to New York, CNN reported. He has an Aventura, Florida, address.

Numerous law enforcement were on scene at an AutoZone business in Plantation, Florida, in Broward County. A van covered in stickers was towed away from the scene by police escort. Law enforcement covered the van with a blue tarp.

No additional information was immediately available about the suspect -- more details are expected to be released during a press conference at 2:30 p.m. Friday.

Federal authorities have arrested a man in Florida in connection to the suspected explosive packages, according to multiple law enforcement sources.

A suspicious package addressed to Booker was discovered in Florida Thursday night.

The FBI said Friday that the package addressed to Booker, a New Jersey Democrat, was discovered in Florida and is “similar in appearance to the others.”

Also, the New York Police Department said it was investigating a suspicious package found in midtown Manhattan that was addressed to former Director of National Intelligence James Clapper, a law enforcement official said.

It was found at a New York City postal facility and also described as similar to the other packages. 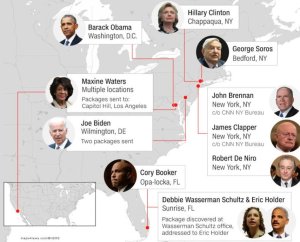 Here is a timeline:

The New York Police Department also tweeted Friday morning that it was investigating a suspicious package, and a law enforcement official told CNN the package was at a postal facility on West 52nd Street in New York.

The 12th package, which was similar to the others, was addressed to both the former Director of National Intelligence James Clapper and to CNN, according to a law enforcement official.

Authorities responded early Thursday to a suspicious package that had been sent to actor-director Robert De Niro at a building in Lower Manhattan’s Tribeca neighborhood. The address, 375 Greenwich St., matches that of the Tribeca Film Center. De Niro, the co-founder of the Tribeca Film Festival, is a vocal critic of President Donald Trump.

The package actually had been received in the general mailroom on Wednesday, according to a law enforcement official. A retired police officer discovered it and left it in his office. After seeing news reports, he realized it was similar to other packages in the news and called police at about 4 a.m. on Thursday, according to the official.

The package was removed from the building about 7 a.m.

Authorities also located two suspicious packages addressed to former Vice President Joe Biden at post offices in Delaware, a law enforcement official said. The packages were similar to others discovered this week and contained potential explosive devices. At least one of them was misaddressed and returned to sender, two law enforcement sources told CNN.

A suspicious package was sent to the Florida office of Democratic Rep. Debbie Wasserman Schultz on Wednesday morning. It was intended for former US Attorney General Eric Holder but had the wrong address. The package was returned to the Democratic congresswoman because her office was the return label on the package, two law enforcement sources said.

CNN’s New York bureau in the Time Warner Center was evacuated shortly after 10 a.m. after the discovery of a package containing a bomb, said law enforcement officials. They said the package was addressed to former CIA Director John Brennan.

A package containing a possible explosive device intended for Obama was intercepted by the US Secret Service at a screening facility in Washington.

A package containing a possible explosive device and intended for Clinton, the former secretary of state and first lady, was intercepted. It was discovered during routine mail screening procedures Tuesday evening, according to authorities.

A suspicious package targeting billionaire investor and philanthropist George Soros was rendered safe in Bedford, New York, a law enforcement source told CNN. Bedford police said they received a call about 3:45 p.m. reporting a suspicious package found in a mailbox. The package appeared to be an explosive device, police said.

MCLEANSVILLE, N.C. -- A dog was found shot and killed just yards away from a McLeansville family's home.

Now, Guilford County Animal Control is investigating as this Triad family asks for everyone's help to get justice.

HIGH POINT, N.C. -- Long before he was the mayor of High Point, Jay Wagner was a young student at Northwood School.

“At Northwood, we had a lot white kids from the western side of town,” Wagner said. “And then we had kids from the housing projects that were bused to school.”

The band announced on Thursday that the release on Sept. 4 will include a four-disc CD and vinyl box set editions that includes 10 bonus tracks, including outtakes and alternative versions.

Shooter indicted on murder charge in death of Julius Sampson Jr. outside BJ’s Restaurant and Brewhouse

Gov. Cooper to announce next steps for schools, reopening of NC next week

Shooter indicted on murder charge in death of Julius Sampson Jr. outside BJ’s Restaurant and Brewhouse