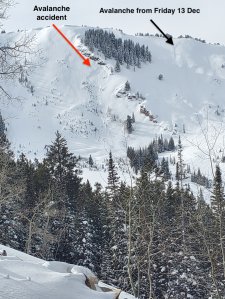 A snowboarder was killed after unintentionally triggering an avalanche near a Utah ski resort on Sunday morning.

The snowboarder, identified by the Summit County Sheriff’s Office as 45-year-old Raymond M. Tauszik of Salt Lake City, was “caught, carried and killed” by the avalanche when he was skiing down a slope, according to the Utah Avalanche Center.

Tauszik was snowboarding alone when he accidentally triggered the 3-feet-deep and 100-feet-wide avalanche, according to UAC.

He was leaving Canyons Village of Park City through the backcountry exit gate at the top of the 9,990-feet lift to Dutch Draw, the accident report read.

The avalanche center described Dutch Draw as “steep, rocky, avalanche prone terrain” which has been the site of other avalanche fatalities, including one in February 2012.

On the day of the accident, UAC issued a forecast for the Salt Lake Area Mountains rating the avalanche danger as “considerable” and advised those in the area to avoid the terrain.

UAC Executive Director Chad Brackelsberg told CNN that anyone participating in these events should be well prepared during skiing and snowboarding season.

Skiers and snowboarders are urged to check their local avalanche forecast conditions before going out.

“Anybody who is recreating in the backcountry is recommended to have their avalanche rescue gear, a beacon, shovel, and probe, and that they know how to use it.”

UAC staff and Park City and Canyons resort avalanche professionals are currently investigating the incident, according to Brackelsberg.

Jacob is looking for his Forever Family

LEXINGTON, N.C. — A program in Lexington City Schools is helping students graduate and go to college. It's called Project Potential, and it's specifically for students whose families are at an economic disadvantage and who will be the first generation of college graduates.

Project Potential starts interviewing students in eighth grade. Students have to go through an application process, and ultimately 36 students are selected to start the program in ninth grade.

WINSTON-SALEM, N.C. — It is a casual lunchtime meet up once a week for entrepreneurs, but big things are happening here.

The entrepreneurs all participate in "Marketing Out of the Box" sessions hosted by HUSTLE Winston-Salem, a nonprofit that serves women, people of color and other business owners who don’t fit the typical mold.

Salvatore "Sam" Anello, the grandfather charged in the death of his 18-month-old granddaughter who fell from a cruise ship, will change his plea to guilty, according to his attorney.

"This decision was an incredibly difficult one for Sam and the family, but because the plea agreement includes no jail time and no admission of facts, it was decided the plea deal is in the best interests of the family," his attorney Michael Winkleman said in a statement obtained by CNN.

Person killed in crash on U.S. 64 in Davidson County

CDC warns of potential coronavirus spread in US

Person killed in crash on U.S. 64 in Davidson County