OCRACOKE ISLAND, N.C. — A 68-year-old man was pulled under the water by a shark Wednesday in the Outer Banks — this time on Ocracoke Island.

Andrew Costello was swimming outside the first breaker about 25 feet offshore, directly in front of the lifeguard stand, when he encountered a gray shark about 7 feet long, Hyde County officials said. A lifeguard saw the shark pull Costello under the water. He suffered several bites to his rib cage, hip, lower leg and both hands.

A witness told CNN he saw a “trail of blood from water to the sand.”

Costello was able to swim out of the water, where a doctor who happened to be in the area was able to stabilize him, said Justin Gibbs with Hyde County EMS. Costello, who was visiting from Massachusetts, was then airlifted off the island to Vidant Medical Center in Greenville, N.C. He was stable and alert, officials said.

Hyde County officials said the attack happened around 12:10 p.m. on Lifeguard Beach at the National Park Service Day Use Area on Ocracoke.

Wednesday’s attack marks the seventh incident on North Carolina beaches in June and July. Last year, there were only four reported in the state through the summer. George Burgess, director of the Florida Program for Shark Research, told FOX8 recently that  there are several environmental factors that make North Carolina appear to be a “perfect storm” for shark activity this summer.

Ok. Witnessing a shark attack is probably the scariest thing I've ever seen 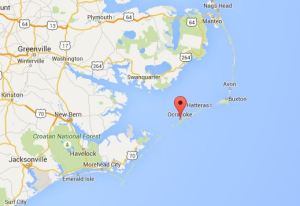 ld man was bitten by a shark in the leg and back while trying to get children and another adult out of the water near Avon.

On Saturday, an 18-year-old was swimming with other people near Waves when the shark bit his calf, buttocks and both hands.

Both victims were rushed from the beach and underwent surgery.

In South Carolina, a shark attack also took place Friday morning at Hunting Island State Park. The male victim was taken to Beaufort Memorial Hospital for treatment. No further information was available about the victim or the extent of his injuries.

On June 24, an 8-year-old boy in Surf City suffered what appeared to be a shark bite. Police said the wounds were superficial and the injuries were minor.

On June 14, 12-year-old Kiersten Yow from Archdale and a 16-year-old boy from Colorado both lost their arms in shark attacks at Oak Island.

Yow lost her left arm below the elbow and suffered injuries to her left leg. Hunter Treschl lost an arm.

Posted on the Kiersten Yow Facebook support page on Wednesday was this note:

“Another attack today, that makes 7 in NC. Please everyone be safe. I have seen the “tips” like swim in groups, no jewelry, no bleeding, stay out during dusk to dawn, she was maybe waist deep at most, etc. In Kiersten’s case, all of this was followed, unintentionally at the time. There was nothing that seemed “textbook” except for the murky water of NC. Her cousin, who was swimming with her along with a few others, was the first to help by yelling shark and drawing out attention to her… All of your prayers and support has also helped us stay positive during this journey. I hope all of the other survivors have the same support and feel the love we have. We continue to pray for all of them and hope they recover and stay strong.

The chance of an attack is rare (I have read 1 in 11.5 million chance?) but seems to be more frequent recently. Everyone, please stay alert as you vacation.”

A 13-year-old girl was bitten while boogie boarding off Ocean Isle Beach on June 11. In that incident, the victim suffered non-life threatening injuries, but the shark took bites of her boogie board.

Flu season intensifies with 6M infected in US: CDC

Flu season intensifies with 6M infected in US: CDC

Greensboro third graders to get bikes

Man arrested in connection to armed robbery at Dollar …

How will be NC’s next governor

Here are the 12 Senate Republicans who helped pass …

What rights does the Respect for Marriage Act protect?

Even though Black Friday and Cyber Monday are over, …

These 25 deals were the most shopped among BestReviews …

The best gifts for 5-year-olds

The best gifts for 10 year olds

Ex-teacher says she was kicked off OnlyFans after …

One dead after shooting at NC McDonald’s

US advances in World Cup with 1-0 win over Iran

Even though Black Friday and Cyber Monday are over, …

These 25 deals were the most shopped among BestReviews …

The best gifts for 5-year-olds

The best gifts for 10 year olds