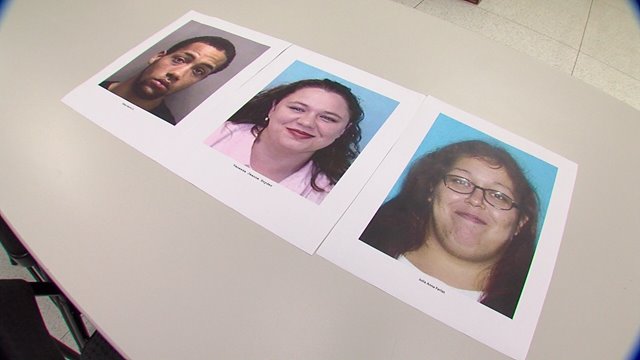 Two of those people are now in custody.

She is being transferred to the Alamance County Detention Center. Her bond has not been released.

Julia Anna Farias, 29, is still being sought by authorities.

All three are charged with human trafficking, sexual servitude, kidnapping and felony conspiracy to human traffic, according to officials.

Investigators said the three suspects brought a 19-year-old woman from the Ft. Meyers, Florida area to Graham, N.C. They used a local boarding house while forcing the woman to have sex with as many as 10 men a day for a month.

Harris was arrested for probation violations in Florida and should be extradited to North Carolina soon.

Police first started investigating when someone reported concerns about the teenager involved.

It took months to investigate and officers said they found the victim on Oct. 1. They said she had run away and feared for her life.

They worked with her until she was ready to talk, and District Attorney Pat Nadolski was finally able to get charges filed on the three suspects.

Anyone with information on her whereabouts or any additional information is asked to contact the Alamance County Sheriff’s Officeat 336-570-6313.

OKLAHOMA CITY -- The governor of Oklahoma urged the public to take precautions against the coronavirus after he tested positive, KFOR reports.

Gov. Kevin Stitt spoke during a Zoom meeting with the Oklahoma Interim Commissioner of Health Lance Frye and announced his diagnosis.

During this pandemic, a lot of things have gone by the wayside, including those visits to grandma's and grandpa's.

Some grandchildren are fortunate enough to live nearby where they can visit safely, but what about thos grandparents who live out of town?

BLUE SPRINGS, Mo. -- A pharmacist who diluted medications that were supposed to be life-saving treatments for cancer patients will soon be released from prison.

The U.S. Department of Justice said Robert Courtney will be moved to a halfway house this week after spending less than 20 years behind bars in a drug scandal that made national news.

Walmart to require all customers to wear masks starting July 20

Mozelle’s Southern Bistro in Winston-Salem shares recipes to put those fresh veggies, fruit to good use

A look inside one of Guilford County’s socially distanced classrooms