LEXINGTON, N.C. — An additional 40 people have been identified with signs and symptoms consistent with salmonellosis — this time in Davie County.

On Wednesday, the investigation expanded to include 40 additional people in Davie County. 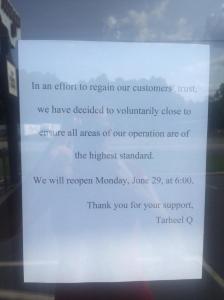 At least seven of the individuals had to be hospitalized due to their illness.

A sign posted on the door Wednesday said the restaurant would close until Monday, June 29, “to ensure all areas of our operation are of the highest standard.”

Though inspectors are still working to figure out the source of contamination, the restaurant was asked to clean and sanitize all surfaces including the walk-in refrigerator.

Every year, salmonella is estimated to cause one million illnesses in the United States, with 19,000 hospitalizations and 380 deaths, according to the Centers for Disease Control and Prevention. Most persons infected with salmonella develop diarrhea, fever, and abdominal cramps 12 to 72 hours after infection. The illness usually lasts 4 to 7 days, and most people recover without treatment. However, for some, diarrhea may be so severe that the patient needs to be hospitalized.

Anyone who became ill with diarrhea within four days after eating at Tarheel Q on or after June 6 is asked to call the Davidson County Health Department at (336) 236-3096.

Woman makes the swim across Lake Erie from Canada …

Encouraging kids to journal on this week’s Mommy …

Jed is looking for a Forever Family

Treating sore or dry throat on this week’s House …

Carrot Top Flags are Made in North Carolina

Woman makes the swim across Lake Erie from Canada …

Get paid to pig out at Las Vegas buffets

These are the victims of Highland Park shooting

Chance for strong storms in Piedmont Triad as heat …

Chance for strong storms in Piedmont Triad as heat …