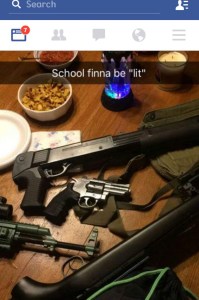 ROWAN COUNTY, N.C — A Rowan County teen was arrested after posting a photo of several guns with the words, “school finna be lit,” on her Facebook page.

The student, Amber Beaver, 17, who posted the photo of a small pistol, a shotgun, a bolt action rifle and a semi-automatic rifle, had just re-enrolled in school after dropping out last year.

When investigators went to her home at 1425 Barger Road, in Salisbury, her father said she had not been home in about a week. He said Amber was staying with an aunt who lived in either Spencer or East Spencer.

After making several calls, authorities found her at 115 Henderson St. in Spencer. Beaver talked to investigators over the phone and said that she had heard that the Rowan County Sherrif’s Office was looking for her because of a recent Facebook post.

Beaver told investigators that the post was just a joke and that she thought it was funny.

She was charged with one misdemeanor count of communicating threats and one felony count of making a false report of mass violence on an educational property.

Beaver is being held in the Rowan County Detention Center under a $7,500 secured bond.

Hurricane Ian set to bring rain to NC this weekend

Andre is looking for a Forever Family

Sammy is our Pet of the Week!

Why Hurricane Ian poses a unique threat to Tampa …

NC school named best in the country for 2023

2 dead after shooting in Asheboro: police