James Monroe Barrett, 60, of 3659 Bethel Road in Jonesville, was taken into custody after a multiagency manhunt. He was receiving medical attention for injuries sustained during a standoff with law enforcement and died at the scene at about 11 a.m.

Deputies responded to a call about a domestic dispute involving the shooter at 5:55 a.m. That's when he opened fire.

Barrett, also known by the alias Thomas Barnett, is also believed to have set a house on fire before fleeing into the woods.

The deputy who was shot has been identified as Sgt. Steven Russell, a 12-year-veteran in the Patrol Division. He has two children.

Russell received a gunshot to the shoulder and shrapnel struck him in the forehead. He was airlifted from the scene and is expected to be OK.

Two other people were taken to the hospital. One was taken to Wake Forest Baptist, the other was taken to Hugh Chatham Hospital in Elkin, both with non-life-threatening injuries.

One of those injured was the owner of Myers Dairy. 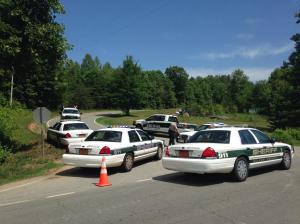 JONESVILLE, N.C. -- A search is underway for a suspect who shot a deputy off North River Ridge Road a few miles west of Jonesville early Monday morning.

The shooting happened at 5:55 a.m. at the intersection of North River Ridge and Bethel roads.

Deputies responded to a 'shots fired' call and found the suspect shot into a cruiser and hit at least one deputy.

Another person, a local dairy farmer, was shot in addition to the deputy. This second person was a resident in the area, according to officials.

One person was airlifted and another was taken by ambulance to Wake Forrest Baptist Medical Center.

A grandmother and two children were trapped in their homes all morning. SWAT teams just got them out safely.

Firefighters have not been able to put out the fire at the scene because there is still an active shooter, according to officials.

The home that is on fire belongs to the same family who was trapped in the home.

The suspect is described as a white male in his 40s or 50s. He is considered armed and dangerous.

Woman in life-threatening condition after stabbing in Winston-Salem, police say

‘If it wasn’t my job I would have done that for free’: Officer after surviving Capitol mob assault

WASHINGTON (AP) — President-elect Joe Biden on Saturday filled out his State Department team with a group of former career diplomats and veterans of the Obama administration, signaling his desire to return to a more traditional foreign policy after four years of uncertainty and unpredictability under President Donald Trump.

GRAHAM, N.C. – A person died following an accidental house fire in Graham on Saturday, according to a Graham Fire Department news release.

The Graham Fire Department responded to a structure fire around 06:04 a.m. on Saturday at 316 W. Market Street.

On Thursday around 4:48 p.m., police responded to the State Employees Credit Union at 100 E. Elmsley Drive when they were told about a robbery.

Woman in life-threatening condition after stabbing in Winston-Salem, police say

If you received unemployment benefits you could owe taxes

If you received unemployment benefits you could owe taxes