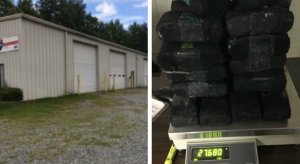 THOMASVILLE, N.C. — A joint investigation involving several agencies has resulted in a record cocaine bust in Thomasville, according to a press release from the Thomasville Police Departement.

On Aug. 6, investigators executed a search warrant at a warehouse located at 1416 Unity Street in Thomasville.

Jose Enriq Guzman Valenzuela, 27, of Greensboro; Adrian Sierra Aranda, 32, of Guanajuato, Mexico; and Jorge Santiago Perez, 65, no address available, were charged with conspiracy to traffic cocaine, according to a news release.

Casas-Peres was booked into the Guilford County Jail while the others are being held in the Davidson County Jail.

‘I’m not alone’: Teen with autism gets support from football players at school

‘Mini-offseason’ over as No. 12 Tar Heels return against BC

BOSTON (AP) — It’s been so long since No. 12 North Carolina played its last game that it almost feels like a new season to coach Mack Brown.

Three weeks after starting things off with a victory over Syracuse, the Tar Heels travel to Boston College on Saturday.

(NEXSTAR) - Some of the parched hills across the west that have been ravaged by fire in recent months will see little relief this fall.

New maps from the National Oceanic and Atmospheric Administration predict drought-like conditions impacting nearly all of the desert southwest and the most populated regions of California as well as much of west Texas and southern Oregon.

Dad battles through stroke, COVID-19 to get to daughter’s wedding

OKLAHOMA CITY (KFOR) – Ron Cruise fought a near-deadly battle with COVID-19 and endured intense physical therapy sessions with grit and determination. He did this with a singular purpose – to watch his daughter get married.

"He's a fighter,” said occupational therapist Mitchell White. “He gets up every morning and does exercises to try to regain what he's lost. He doesn't want anybody doing anything for him that he can do himself. He has been that way since I met him.”

‘Mini-offseason’ over as No. 12 Tar Heels return against BC

Dad battles through stroke, COVID-19 to get to daughter’s wedding

Burlington man charged with sexual exploitation of a minor

Relief for sleep apnea patients could come not with a machine, but an implant

‘I’m not alone’: Teen with autism gets support from football players at school

Army veteran says he was fired for refusing to remove BLM mask: ‘There’s nothing political about it’

‘Not all wounds are visible’: Dog helps veteran cope with PTSD

First-time voter? Here’s what you need to know

Burlington man charged with sexual exploitation of a minor

Could cats hold the key to a COVID-19 vaccine?

Harvest Moon to appear in the sky tonight, first of 2 October full moons!

Coronavirus in North Carolina: Number of cases passes 212,000; Here’s a county-by-county breakdown of cases in the Piedmont Triad