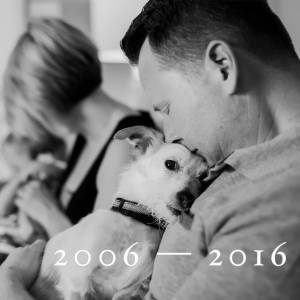 Otis Tucker, the beloved rescued dog of FOX8’s Chad Tucker — who became a favorite with viewers on-air and online — passed away Sunday evening at the age of 9.

Chad made the announcement on his Facebook page saying Otis had suffered from diabetes, Cushing’s disease and, in the past week, rapid kidney failure.

FOX8 viewers came to love and know the rescued Jack Russell/Bishon mix from his visits on the FOX8 morning news, community Christmas parades and Facebook viral videos of him having tea parties and stroller rides with Chad’s daughter Carson Parry.

Given only a short time to live, Chad and his wife Meredith gave Otis a “bucket list weekend” which included lots of car rides, trips to the park, ice cream, visiting his favorite bank teller and, of course, playing with his Carson Parry.

Passersby help after crash on I-74 in Guilford Co.

McDonald’s may do away with a familiar item

Will we be able to see rare green comet in NC?

When will Tyre Nichols video be released?