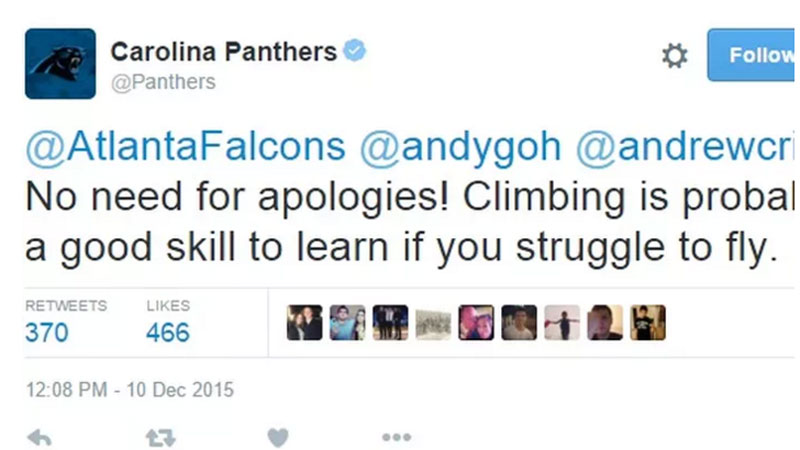 CHARLOTTE, N.C. – The Carolina Panthers and the Atlanta Falcons had a funny conversation on Twitter leading into their game against each other on Sunday.

It started after the Panthers “liked” a fan’s tweet and the fan responded with a GIF involving M&Ms.

They then started talking about the candy and somebody brought up the Falcons. The Panthers responded with a story about a time they pranked the team by mixing Skittles into their M&Ms.

@andygoh @andrewcrisp Last time we visited @AtlantaFalcons, we mixed skittles into their m&m's bowl. Might be the best prank of all time.

@Panthers @andygoh @andrewcrisp So evil. Might want to watch where you sit next time you visit the Dome. pic.twitter.com/In3EaINZGS

@AtlantaFalcons @andygoh @andrewcrisp No need for apologies! Climbing is probably a good skill to learn if you struggle to fly.

The Panthers are 12-0 this season and are first in the NFC South. They face the Falcons (6-6) at 1 p.m. Sunday from Bank of America Stadium, a game that will air on FOX.

Watch: Bear cub tries to get into Colorado home

CREEDE, Colo. (KDVR) - A bear cub tried to get into a home in Colorado earlier this week, and Charlene Bixler captured it on video.

In a Facebook post, Bixler said, "Our little visitor yesterday! No mama in sight until about an hour later. She was headed north up the mountain with the cub in tow."

COLCHESTER, Vt. (NewsNation Now) — A New Hampshire man beat out the rest of the competition in Vermont with a pumpkin tipping the scales at more than 2,000 pounds.

A crane was needed to place the pumpkin onto the scale.

MEXICO CITY (Border Report) -- As crews were cleaning 22 tons of trash from Mexico City's drainage system, they came across what is being described as a "giant rat."

The rat, which turned out to be a Halloween prop that was in a warehouse, apparently washed away during storms, somehow disappearing into a labyrinth of drains underground.

Top tweets from the #NCSenateDebate

Coronavirus in North Carolina: Number of cases passes 195,000; Here’s a county-by-county breakdown of cases in the Piedmont Triad

No charges against NC officers in custody death of Black man