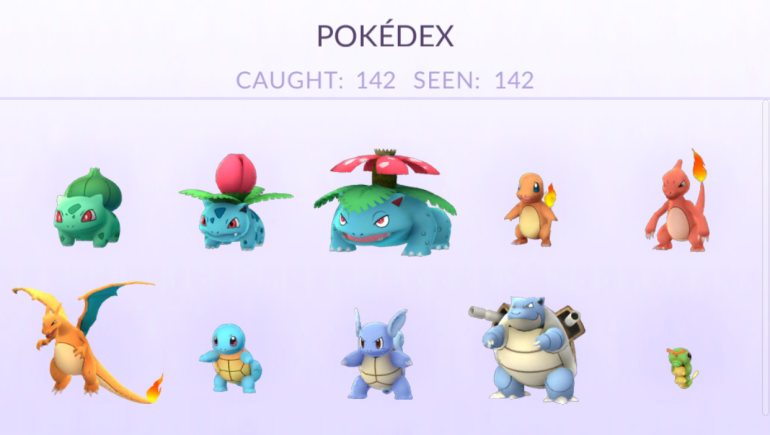 NEW YORK – Gotta catch ’em all. That was one New Yorker’s motto, and he actually fulfilled his goal.

Nick Johnson announced to the world on Thursday that he had caught all 142 Pokemon currently available in the United States on the Pokemon Go game, and it appears he’s the first to do it. He posted images of his captured Pokemon, showing he’s caught a total of 4,629.

The other stats he released included that he’s hatched 303 eggs, and is on level 31.

And you may be shocked to learn he didn’t go very far to catch ’em all.

“I went to Jersey for some Dratini hunting. Also caught a Porygon there. Rest were Manhattan and Brooklyn,” Johnson said in response to a question on his Reddit page.

He also caught a few in rural upstate New York, but it doesn’t seem that moved him closer to finding them all.

“When I went to a rural area for weekend Pokemon were incredibly hard to find until I got to a hotspot in one town. It’s a shame the game doesn’t work there as it would be so much fun to actually be able to explore outside the city with this game,” he said.

So what was his last catch?

“Last thing I found was the Omanyte I needed to evolve to Omastar.”

Not only did he accomplish this goal, but he’s apparently improved his health in the meantime!

He said he’s lost “about 8 pounds, but I was doing 8 miles a day. My endurance walking/jogging has definitely improved. Either gym or poke walk probably will do the trick, just do whatever gets you motivated to exercise! For me Pokemon go made it fun to exercise in a way the gym does not.”

And he apparently did this all while working 50 plus-hour weeks! So how’d he do it? “I also haven’t slept as much as a normal human should this last week.”

“Gyms are largely a waste of time in big cities. Defending is impossible and any gym in a populated area will get taken over in a few minutes no matter what I leave there”
“I keep it in power saver mode while I play so my battery lasts longer.”

You can find more tips from Johnson here, and learn more about his adventures here.

Here are some pictures showing his accomplishment:

Reidsville Middle School closed for 2 weeks due to COVID-19 exposure; remote learning is in place

The president paid $750 in federal income taxes the year he won the presidency.

OPELOUSAS, La. (KLFY) -- A pregnant woman, and her unborn child who were shot died following an argument with her boyfriend, police say.

It happened around 8:30 p.m. Saturday in the 700 block of East South Street, according to Opelousas Police Chief Martin McLendon.

Reidsville Middle School closed for 2 weeks due to COVID-19 exposure; remote learning is in place

Asheboro mall being revitalized ahead of holiday shopping season

Asheboro mall being revitalized ahead of holiday shopping season