ASHEBORO, N.C. — Thanks to help from the public, the new baby chimpanzee at the North Carolina Zoo has its name!

The baby boy chimpanzee was born on March 18.

A contest was open to the public to vote on a name through the Zoo’s website through April 29. The Zoo received about 6,000 votes. 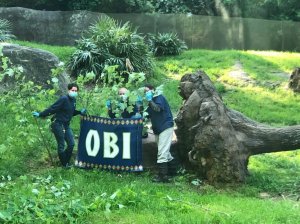 Obi is a word of Nigerian origin meaning “one who charms others” or “heart.”

Obi’s birth is significant because there have only been two other successful chimp births at Association of Zoos and Aquariums (AZA)-accredited zoos in the past two years. The Zoo’s chimpanzee troop is one of the larger troops in AZA zoos in the United States.

Chimpanzees are listed as endangered in the wild. The North Carolina Zoo is actively involved in wild chimpanzee conservation in Uganda’s Kibale National Park, which boasts the largest chimpanzee population in East Africa.

Woman who confessed to killing her 9-year-old son pushed him into a canal in Florida, affidavit says

LEXINGTON, N.C. -- Fire crews in Lexington are working to extinguish a blaze on Sunday, according to Davidson County officials.

MACON COUNTY, N.C. -- A deputy in Macon County and his wife were killed in an accident in Georgia on Saturday afternoon, according to a Macon County Sheriff's Office statement.

The sheriff's office is calling for prayers for deputy David Head and his wife Dawn.

On Sunday at 5 a.m., officers with the BPD responded to an apartment at 1515 S. Mebane Street in reference to a domestic disturbance call.

15-year-old set to graduate from high school and college

East Carolina University cuts 4 sports as part of plan to save $4.9 million