SURF CITY, N.C. – A North Carolina police chief who retired after calling the “Black Lives Matter” movement a “terrorist group” on Facebook is speaking out about the issue. 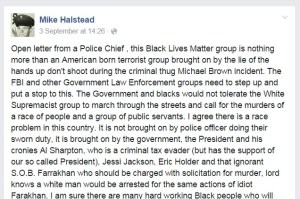 Halstead posted a controversial message to his personal Facebook page on Sept. 3, saying the “Black Lives Matter” movement “is nothing more than an American born terrorist group.”

An emergency town meeting was called and the Council voted to accept Halstead’s retirement, which was effective immediately.

Halstead told “Fox & Friends” that he has no regrets about the post, which has since been deleted or made private.

“It is a terrorist group, if you can march down the streets and you can call for the death of police officers and a race of people. “[If] you can make slogans and hold banners that says Black Lives Matter and then you can yell out, ‘Pigs wrapped in bacon and frying in a pan.’ ‘What do we want? Dead cops. When do we want them? Now.’ I mean, come on,” he said.

Open letter from a Police Chief , this Black Lives Matter group is nothing more than an American born terrorist group brought on by the lie of the hands up don’t shoot during the criminal thug Michael Brown incident. The FBI and other Government Law Enforcement groups need to step up and put a stop to this. The Government and blacks would not tolerate the White Supremacist group to march through the streets and call for the murders of a race of people and a group of public servants. I agree there is a race problem in this country. It is not brought on by police officer doing their sworn duty, it is brought on by the government, the President and his cronies Al Sharpton, who is a criminal tax evader (but has the support of our so called President), Jessi Jackson, Eric Holder and that ignorant S.O.B. Farrakhan who should be charged with solicitation for murder, lord knows a white man would be arrested for the same actions of idiot Farakhan. I am sure there are many hard working Black people who will agree with me. I have been a Police Officer for 35 years. I do not judge anyone by the color of their skin, but by there actions. A criminal is a criminal whether a police officer or any other profession. I will not state statistics because black lives matter do not care or believe proven statistics. I put allot of the blame for these cop murders on the media and the way they report police related shootings. There is no need to list or even state the race of a person shot by the police. It is more important to wait for the facts and report those. But and a big but that does not make money for these greedy media ass holes. When a black thug is killed by the police they are all over it as is Mr. Barack Obama. However when a police officer white, black or any race is murdered for doing his job the media is short with it’s reporting or not at all. When a white person is killed by a black officer you hear nothing. Has our so called President spoke publicly about these murders of police officers by blacks, HELL NO he has not. Step up Mr. President, or step down because we do not need you. Has our Attorney General spoke against these murders, no of course not because she was appointed by Barack Obama. Now let me say this, and this is not a threat but common knowledge. I have instructed my officers to be vigilant, if threatened take appropriate action. If that means shoot a thug, then do it and answer for it while you are still alive not dead. Law Enforcement is fed up with this murderous society who want to take out those who protect and serve. Imagine if all law enforcement shut down for just 1 day. There would be murders, rapes, robberies, you name it. America wake up, all of you black, white, Mexican whatever you need the police, we do not need you. End this Black Lives Matter bull shit and start a movement that all lives matter. As for the New Black Panther movement who wants to kill whites and cops, go for it, we are ready for you. You take one of us and there will be 100 who will step up and end you. This letter is not meant to offend anyone, just the feelings of a man who has spent the last 35 years of his life serving and protecting, for what so a thug can take it or to be treated as a criminal by the very people I swore to protect. Let’s get this around folks so maybe our President and the media will get a wake up call. Be safe all of my Brothers and Sisters in blue, not white, black, yellow or brown BLUE.

The most recent one happened Saturday morning in the 1200 block of Fairview Street.

GREENSBORO, N.C. (WGHP) -- Greensboro city inspectors will walk through the vacant Miller Furniture building on Tuesday, following a fire that damaged the roof on Jan. 14.

Code enforcement officials will focus on 314 S Elm St. but can expand their inspection to other buildings if there are signs of damage.