GUILFORD COUNTY, N.C. — On Tuesday night, the Guilford County Board of Education will hear what people have to say about a proposed policy that would allow students and their families to appeal short term school suspensions.

The idea is creating a lot of concern across the area and even from several states away.

“Learning from the past. You have to learn from the past to make sure this doesn’t happen again,” Andrew Pollack said.

It’s been less than two years since he lost his daughter, Meadow, in the Marjory Stoneman Douglas High School shooting in Parkland, Florida.

“I wouldn’t put my kid in an environment where there’s no consequences for misbehavior or a kid who’s being disruptive couldn’t get suspended,” Pollack said. “My daughter would be alive if I had her in a private school or a charter school.”

That’s why he’s taking a stand to make sure what happened at his daughter’s school doesn’t happen in Guilford County.

Pollack says it starts with discipline on every level.

“Knowing what happened in Parkland and how he slipped through the cracks of discipline,” Pollack said. “When you don’t hold these kids accountable to consequences, it just leads to a chaotic environment and disruptions in the classroom.”

Representatives from the NAACP disagree.

“It’s likely if a student is a danger to campus, they would be suspended for more than 10 days,” said Reverend Frank Thomas, with the Mount Zion Baptist Church in High Point. “They would get a long term suspension if they are deemed dangerous, disruptive or destructive to the education of other students.”

Standing outside of the Guilford County Schools Administration building in Greensboro Monday morning, the group said they feel the concern with the policy is biased and could hinder the education of some GCS students.

“African-American children are most likely to be suspended. This disturbing fact occurs even when student profiles are identical and the misbehavior is accountable,” said Joseph Frierson, with the Mount Zion Baptist Church of Greensboro.

The Board of Education meeting will be held on Nov. 12 at 6 p.m. in the board room of the school administration building. 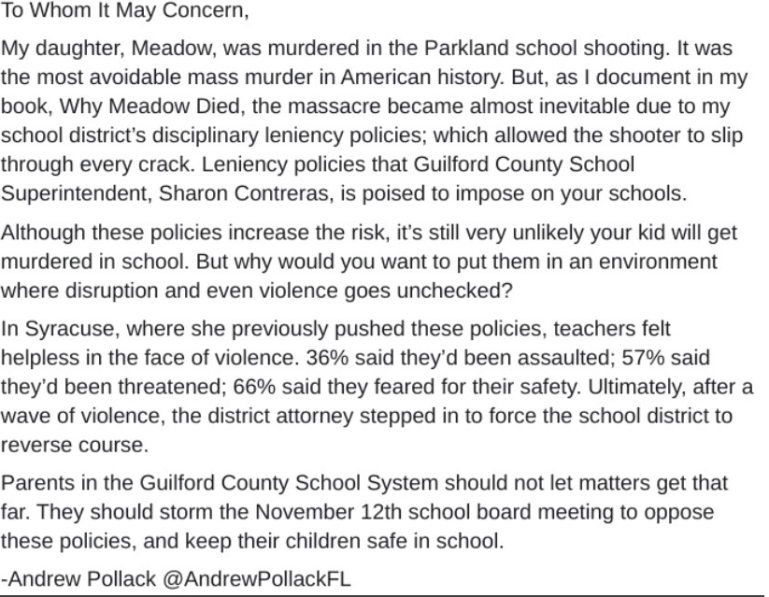 Bryce has lots of love to give a patient, kind owner

Investigators on the scene of incident in High Point

Bryce is our Pet of the Week

Do the best for your skin as summer heats up

Inmar Intelligence is Made in NC

Bryce has lots of love to give a patient, kind owner

Triad summer camps cut back due to gas prices

7 deadliest stretches of highway in NC

Triad summer camps cut back due to gas prices

NC Attorney General Stein says he had a minor stroke