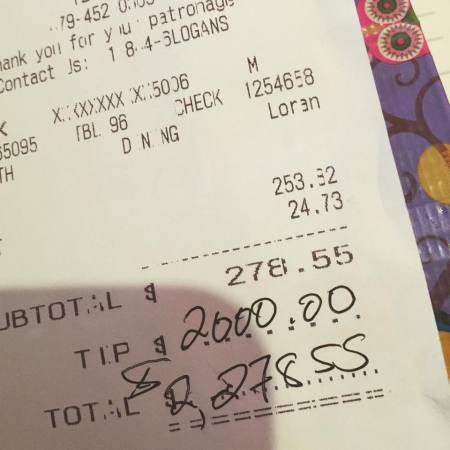 FORT SMITH, Ark. — An Arkansas waitress could not believe her eyes after getting the tip of a lifetime.

She told KFSM she said she was completely shocked when she discovered the receipt showing her tip.

Lopez said she didn’t personally know the woman who left the tip, but she had heard of the customer before. The customer was reportedly known for being a good tipper. The waitress said it was the first time she served her and actually spoke with her.

The waitress said she didn’t look at the receipt immediately when it was handed to her. But when she did look at it later, she was stunned.

“I’m pretty sure my jaw dropped to the floor, and my heart stopped,” Lopez said. “I couldn’t talk for a good two minutes.”

The unnamed customer also gave the bartender a $700 tip and each cook a $100 tip, according to the waitress.

“I had so many rough nights here lately, and then she did that,” the waitress said. “I’m forever grateful for it too!”

KINSTON, N.C. (WITN) -- The longest serving active duty police officer in North Carolina has passed away, according to the Kinston Police Department.

Officers Levi Simmons began his career in law enforcement in 1970 with the Jacksonville Police Department. He was voted Policeman of the Year while he was there.

GREENSBORO, N.C. (WNCN) - The Atlantic Coast Conference has announced game times and networks for matchups on Oct. 9 and 10.

Louisville and Georgia Tech play Friday, Oct. 9 in Atlanta at 7 p.m. The Cardinals and Yellow Jackets game will be broadcast on ESPN.

Can President Trump release his own tax returns?

WASHINGTON (NEXSTAR) -- President Donald Trump has labeled a New York Times report saying he paid just $750 in federal income taxes the year he ran for president and in his first year in the White House as "fake news."

The big question: Can President Trump release his tax returns to prove the story is not correct?

Can President Trump release his own tax returns?

With little movement on new stimulus checks in US, here’s what other countries have done

Educator of the Week: Constance Turrentine

Denver inmate attempts escape by clinging under bus, while handcuffed