It began for Nickolay Lamm as a question: What would Barbie look like if she had the dimensions of an average woman?

His answer came in the form of the Lammily doll: a shorter, broader, brunette version of the idealistic blond Mattel doll. 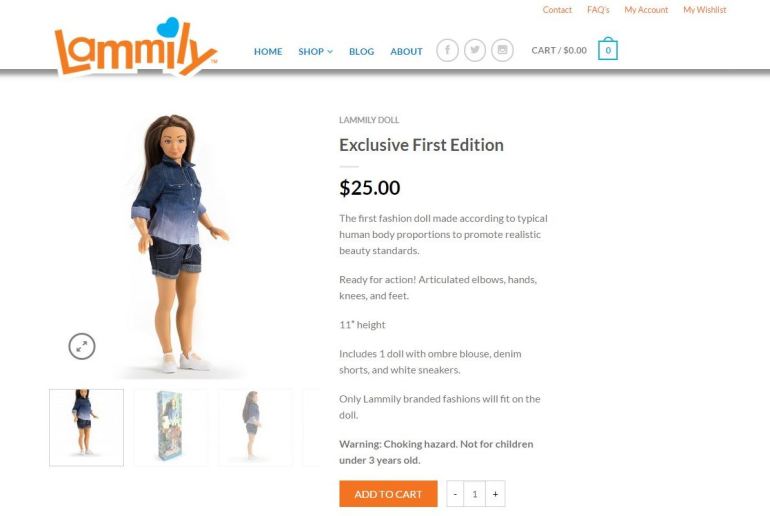 Now Lammily is ready to make her debut, complete with a sticker pack that features pimples, moles, cellulite and scars that can be applied.

“I feel she looks so real, so ordinary, that you don’t focus on what she looks like but … on what she does,” he said by telephone on Wednesday.

The 26-year-old toy maker said the dolls will be mailed to his crowd-funding backers no later than Black Friday, the traditional kickoff for holiday shopping. Thousands more, which were preordered, will also be shipped before the holidays, he said.

Here’s what you need to know about Lamm and the doll:

Germ of an idea

It began in 2013, when Lamm began playing with the idea of what Barbie would look like as an average woman.

But what were those dimensions? He got the answer from the Centers for Disease Control and Prevention. (For the record, the CDC says the average American woman weighs 166.2 pounds and has a 37.5 inch waist.) 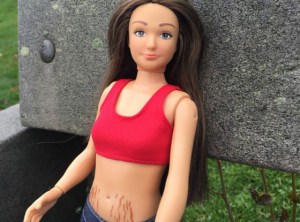 The initial version of the doll was an art project of sorts, with Lamm creating a model of the average woman and doing a side-by-side comparison with Barbie.

The response to the project was overwhelming, with even actress and singer Demi Lovato taking to Twitter to call Lamm’s doll “awesome.”

The doll, with its wide hips, thick legs and rounded rump, goes against the concept of the perfect figure.

“The message I want to send is that it’s not what you look like. That doesn’t define you. What you do does,” he said.

Lamm said he took inspiration for the doll from his own experience in high school, which he described as the “worst time in my life.”

“I really cared about how I looked, and I didn’t feel good about myself,” he said.

Acne and a clothing line

Billed as Lammily Marks, the $5.99 accessory pack will be on sale in January.

The idea, Lamm said, is two-fold: Realism and innovation.

People have acne, tattoos, moles and scars, he said.

While realism is an issue, Lamm said to grow the fledgling company there also has to be innovation.

“You have to be one step ahead,” he said.

Down the road, Lamm said he plans to release a boy doll. Eventually, he said he would like to follow the Build-A-Bear Workshop model, where children could design their own Lammily dolls with custom features.

What’s in a name?

The doll is not named Lammily. Rather, Lamm said, that’s the name of the company.

“With the name, I combined by my Lamm and family,” he said.

A number of his family members have played a role in helping him develop the doll, including creating the box and the stickers.

So, what’s the doll’s name? Whatever you want it to be, Lamm said.

The dolls come with a numbered passport that allows you to name the doll. Lamm said the company website will eventually include a database where people can register the name of their doll.

What does Mattel have to say?

Nothing at the moment. Mattel did not return a telephone call from CNN seeking comment about the doll.

HORRY COUNTY, S.C. (WBTW) — Help is on the way for millions of families who lost loved ones to COVID-19 starting Monday.

ISLE OF WIGHT, Va. (WAVY) — One of two Virginia police officers accused of being involved in a traffic stop incident involving a Black U.S. Army officer in uniform has been fired.

A release from the town manager of Windsor stated that officer Joe Gutierrez was terminated following an internal investigation of the incident that occurred on Dec. 5.

If you know of an educator who is worthy of this nomination please fill out the nomination form here. Educator of the Week is sponsored by the North Carolina Education Lottery.