Kickstarter campaigns have allowed people to fund diverse projects like video games, smartwatches and the restoration of historic locations.

Zack Brown of Columbus, Ohio, posted his Kickstarter project with a goal of $10 and a desire to make potato salad for the first time. As of Monday morning, more than 1,545 backers had pledged $11,000 for a chance to taste Brown’s creation. 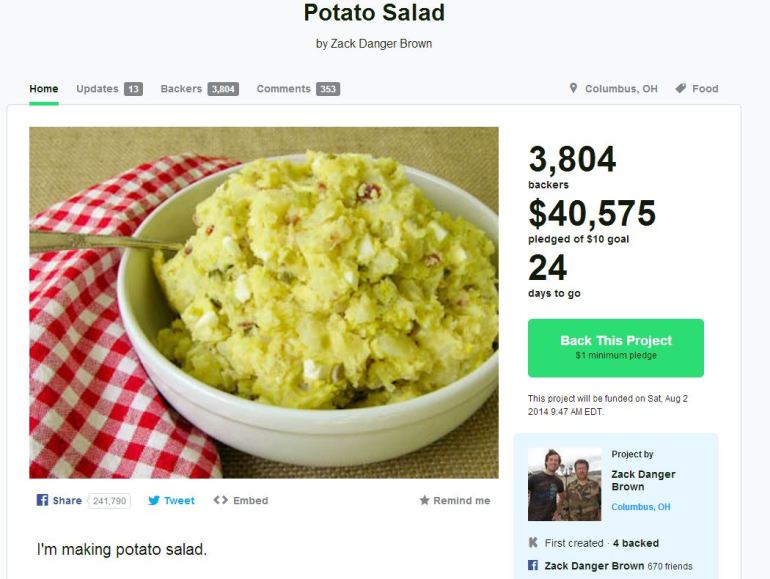 “I am a somewhat risk-averse person,” Brown told CNN. “I like potato salad but had never made it before and wasn’t sure it would be any good. Kickstarter helps people to realize their dreams, so it seemed like a perfect fit.”

Kickstarter is an online donation site where people can pledge money toward a project and get rewards for doing so. Often, the final project is shared with the donors, along with extra benefits for reaching specific monetary goals.

Brown’s stretch goals were blown through quickly, meaning he’ll be making different recipes. He’ll be using mayonnaise from the natural food section of his grocery store and consulting with a chef to make his potato salad better.

Brown said he was blown away by the incredible generosity of backers for his somewhat random project. And he acknowledges a basic culinary truth: Since this is his first time, it might not be any good.

“It has always been my dream to do something that would connect people all over the world,” Brown said. “Did I think that would happen with potato salad? No. But Kickstarter has made my dreams come true.”

One of the rewards for pledging $3 or more was to receive a bit of the potato salad. With the massive response, Brown knows he’s going to need some logistical help in pulling that off, but he’s undeterred.

“I could come to you. You could come to me,” he wrote in response to a question on his Kickstarter page. “Or maybe we could get a restaurant chain to make the recipe and offer free samples as a promotion.”

Brown’s exploits have garnered support from the United Kingdom, France, Romania and other countries outside the U.S. He’s working with a print designer to create a recipe book with one potato salad recipe inspired by each backer’s country.

“I’m inviting the whole Internet to a party in Columbus, Ohio. I hope some people will bring potato salad or potato salad recipes.”

Brown hopes to start making his potato salad recipes some time after his Kickstarter closes in August. He won’t reveal any details about his recipes other than that he will be using potatoes from his local grocery store, vinegar will be involved in one recipe, and there will be a vegan option available.

The making of the potato salad will be recorded and put on the Internet since he plans on saying the name of every backer out loud while he cooks. If the number of backers continues to grow, he may end up losing his voice by the end.

GREENSBORO, N.C. -- A Greensboro man was hit and killed on West Gate City Boulevard on Saturday, according to a Greensboro Police Department news release.

At 10:34 pm, Greensboro police responded to West Gate City Boulevard and West Meadowview Road in reference to a crash involving serious injury to a pedestrian.

SAN DIEGO (AP) — The U.S. Marine Corps has identified all nine people killed when a Marine landing craft sank in hundreds of feet of water off the Southern California coast.

Only one of their bodies was found, despite an intense days-long search involving helicopters and boats ranging from inflatables to a Navy destroyer.

No mass shooting in the U.S. since the pandemic started — what about once it’s over?

XFL purchased by group that includes Dwayne ‘The Rock’ Johnson

Fauci says he is ‘cautiously optimistic’ vaccine will be effective, available early 2021

Coronavirus in North Carolina: Number of cases passes 126,000; Hospitalizations drop to lowest number in weeks; Here’s a county-by-county breakdown of cases in the Piedmont Triad