There will also be school closings, and lane reversals of Interstate 26.

SCDOT crews have prepared the crossover at I-26 and I-77 in Columbia. State troopers just left to flush the lanes of I-26 from the crossover in Columbia to I-526 in Charleston before the lane reversal begins as the coastal areas of SC evacuate ahead of Hurricane Dorian. pic.twitter.com/1E7Ra7441u

Residents in the following zones must evacuate beginning no later than NOON TOMORROW, MONDAY, SEPT. 2: 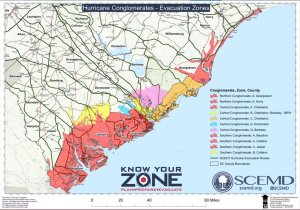 To find out whether they are in evacuation zones, South Carolinians can use the “Know Your Zone” tool on SCEMD’s website. Residents can know their zone instantly using the SC Emergency Manager mobile app, simply by sharing their location.

Evacuation shelter locations will be available on scemd.org and in the SC Emergency Manager mobile app as soon as they are opened.

Evacuees should pack the following essential items in case the evacuation period is lengthy: required medications, adequate clothing and essential personal items. Residents going to evacuation shelters should bring their own blankets, pillows, cots and special food items if they are on restricted diets.

Individuals and families should plan to board pets with veterinarians, kennels, or other facilities in non-vulnerable areas. While pets are not allowed inside Red Cross evacuation shelters, people with animals can take their pets with them to any shelter so volunteers can help them make arrangements.

The governor has also ordered the mandatory medical evacuation for healthcare facilities licensed by the S.C. Department of Health and Environmental Control (DHEC) in the aforementioned evacuation zones.

Hilton Head – One lane is reversed to create three lanes traveling west on US 278 at the intersection of the Spanish Wells Drive and Moss Creek Village Drive. This reversal is approximately two miles in length.

Charleston to Columbia – A full, four-lane reversal on I-26 in Charleston begins at the interchange of I-26 and I-526. The full reversal continues west until the I-26 crossover to I-77 just outside Columbia in Lexington County.

FORSYTH COUNTY, N.C. -- A family of five traveling down I-40 near Winston-Salem dodged bullets after being involved in a road rage incident.

FOX8 spoke with the man who was involved. He did not want to be identified but wanted to share what happened on the highway last Saturday afternoon.

RALEIGH, N.C. (WNCN) – More than half of the people arrested during protests in downtown Raleigh Thursday are charged with false imprisonment.

A Raleigh Police Department spokesperson says of the 20 individuals arrested Thursday, 11 were charged with false imprisonment and impeding the flow of traffic. Protesters blocked traffic and surrounded cars on Capitol Blvd and outside the Executive Mansion.

KEYSTONE, S.D. — President Donald Trump planned a Mount Rushmore speech Friday night including denunciations of protesters he says are trying to “tear down” the nation's history.

He's adding the condemnation of those who pull down statues to a big fireworks show and his more traditional July Fourth praise of America's past and values.

Study finds hydroxychloroquine may have boosted survival, but other researchers have doubts

8-year-old killed in shooting at Riverchase Galleria, 3 others injured