GREENSBORO, N.C. —  A man was killed in a hit-and-run while he was walking across East Cone Boulevard in Greensboro Sunday night.

Sixty-year-old Billy Joe Pope of Greensboro was walking across the intersection of Cone and Sands Drive when he was hit around 10:30 p.m., according to Greensboro police.

The vehicle failed to stop at the scene and Pope died as a result of his injuries on scene.

On Monday, an investigator went back to the scene searching for surveillance footage from nearby businesses.

A camera captured a van in the area.

Greensboro police want to speak with the driver and possible passengers inside it about what they may have seen. They could be potential witnesses. 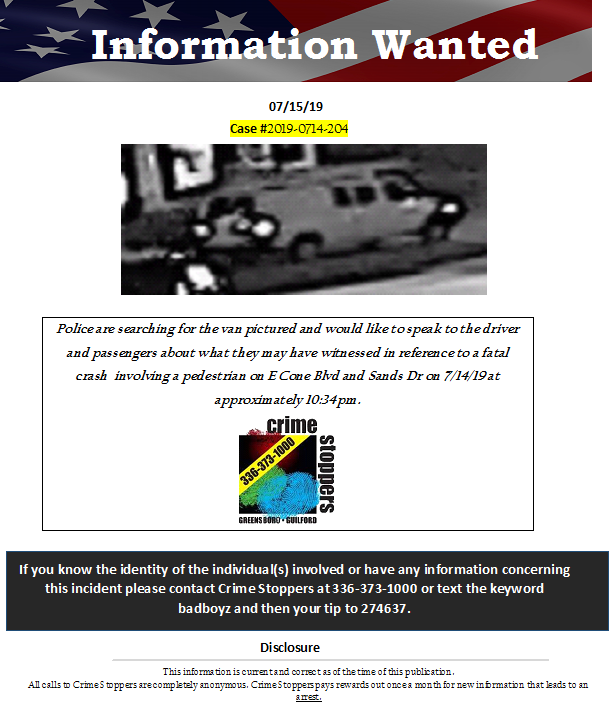 Police are asking the public to call the police department if they have any information on this case.

“I wish they would be adult enough to turn themselves over,” said Robert Carico, who lives near the intersection.

“I’m sorry that the man was hit by the car and died,” Carico said. “I’m just thankful to God that it wasn’t me.”

Postal Service loses $2.2B in 3 months as virus woes persist

‘Good and necessary trouble’: Georgia student suspended after posting a photo of a crowded school hallway

PAWTUCKET, R.I. (AP) — A Trolls doll is being pulled off store shelves amid complaints it promotes child abuse.

Toymaker Hasbro said Wednesday that it's in the process of removing the “Trolls World Tour Giggle and Sing Poppy” from the market and will be offering customers a replacement doll of the popular female character.

ALBANY, N.Y. (NEWS10) -- A second wave of layoffs is hitting works in the United States, according to a new survey by Cornell University and Real-time Interactive Worldwide Intelligence.

The study was released August 4 and indicates that a percentage of workers who've returned to work after a widespread first round of layoffs are now being laid off for a second time.

RUFFIN, N.C. -- A Ruffin man was arrested on kidnapping, assault and sex offense charges after investigators spoke with a victim on Sunday who alleged the man abused her, according to a Rockingham County Sheriff's Office news release.

Investigators with the RCSO have charged and arrested Dwight Jerome "DJ" Brown, 41, of Ruffin, with the following:

Postal Service loses $2.2B in 3 months as virus woes persist

A US first, New Hampshire woman gets second face transplant

US adds 1.8 million jobs in a sign that hiring has slowed

‘Good and necessary trouble’: Georgia student suspended after posting a photo of a crowded school hallway

Second stimulus checks: Where we stand as the week ends

Coronavirus in North Carolina: Number of cases passes 131,000; Hospitalizations remain over 1,100; Here’s a county-by-county breakdown of cases in the Piedmont Triad