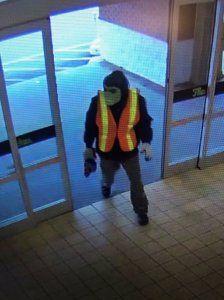 KERNERSVILLE, N.C. -- Authorities around the state are searching for a man accused of robbing Aldi stores at gunpoint while wearing a Hulk Halloween mask.

Around 8:50 a.m., police say the man walked through the front doors of the Aldi on South Main street in Kernersville. They say he was wearing the mask, a reflective vest and was armed with a handgun.

“Once we got down to the second isle, we could hear some kind of a thud,” said customer Jennifer Irizarry, who was inside at the time.

Detectives say he threatened staff members and forced some into an office. Customers say a cashier told them she was held at gunpoint.

The man got away with an undisclosed amount of cash. Some customers had no idea anything had happened until they tried to pay.

“As soon as we got up to the front register to pay, and that’s when she told us what had happened and we were like pretty stunned, because we could hear what was going on but we couldn’t really make out what it was,” Irizarry said.

In the hours following, dozens of potential customers were greeted by a line of crime scene tape at the store.

“At first I thought it was a fire because there’s hardly any robberies in Kernersville,” resident Diane Brown said. “It’s a very safe area.”

Yet, many of them recognized that the store’s location makes it an easy target.

“They can get off the interstate, come in and do it and then get right back on,” Brown said.

No one was injured in the robbery.

“I’m glad I wasn’t here, because if I was here my heart would have probably stopped,” Brown said.

Investigators believe the same man has committed several armed robberies across the state while wearing the same mask.

White House projects 100K to 240K US deaths from virus

President Donald Trump on Tuesday warned Americans to brace for a “rough two-week period” ahead as the White House released new projections that there could be 100,000 to 240,000 deaths in the U.S. from the coronavirus pandemic even if current social distancing guidelines are maintained.

Public health officials stressed that the number could be less if people change their behavior.

HIGH POINT, N.C. -- High Point police pursued a vehicle Tuesday afternoon that was reported stolen out of Archdale Tuesday, according to Travis Stroud, the assistant chief with the High Point Police Department.

NEW MIDDLETOWN, Ohio -- An Ohio arborist with a bucket truck is making a strong entry for son of the year award.

Charley Adams hasn't been able to visit his mom Julie at her Ohio assisted living home because of coronavirus restrictions, so he came up with a clever way to visit her without violating social distancing rules.

White House projects 100K to 240K US deaths from virus

How is my pet affected by coronavirus? Wisconsin animal experts explain

‘We need a miracle,’ Entire family tests positive for COVID-19, father in ICU