McMasters purchased the ticket while traveling through Asheboro in August. 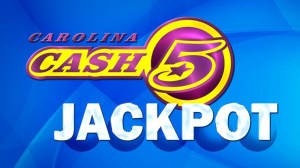 RALEIGH, N.C. — Carolina Cash 5 players in North Carolina, especially those in the Asheboro area, should check any tickets they have to see if they are the winner of an unclaimed $173,578 prize.

The winning ticket was purchased for the Aug. 8, 2014, drawing and will expire on Wednesday, Feb. 4. The ticket, sold at the Quik Chek on Sunset Avenue in Asheboro, matched all five balls in the drawing, beating odds of 1 in 575,757. The winning numbers for the drawing were:

“We’re letting our customers know that they need to make sure they check their tickets,” said Michelle Stanback, the store’s manager. “We hope someone claims the money before it’s too late.”

The missing ticket was one of three that matched all five numbers in the drawing to split a $520,734 jackpot. The other two shares were claimed by a player in Greenville and another in Fayetteville.

Draw game tickets expire when they go unclaimed for 180 days after a drawing. By law, when that happens, half of the money goes to benefit education and the other half goes toward prizes awarded to future winners.

GUILFORD COUNTY, N.C. -- Eight people are in the hospital, and a hit-and-run suspect has been charged with reckless driving following a crash in Guilford County on Friday night, according to a State Highway Patrol news release.

What weather and/or science questions do you have? FOX8 Chief Meteorologist Van Denton will answer them during Weather School. The school is streamed on www.myfox8.com and on the FOX8 Facebook page.

HOUSTON (NEXSTAR) -- The last time there was a full moon on Halloween, the United States was still engaged in World War II. Now it looks like the stars - and the clouds - are aligning to allow most Americans to enjoy some added ambiance on October 31st, even if their trick-or-treat plans have been disrupted by the pandemic.

For many people, the Halloween full moon will be a once-in-a-lifetime event. The last time it occurred was in 1944, according to the Farmer's Almanac. The next one isn't expected to happen until 2039, NASA said.

Is Trump or Biden winning? 5 clues from early voting

Mail carrier accused of hiding 335 pieces of mail in car, including ballot application

Is Trump or Biden winning? 5 clues from early voting

Halloween events in the Piedmont Triad