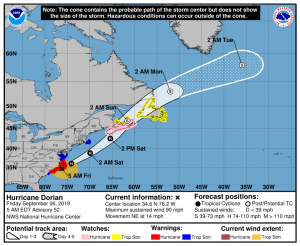 As of 5 a.m. Thursday, the Category 1 storm is about 25 miles east of Cape Lookout, North Carolina, and 55 miles southwest of Cape Hatteras, headed northeast at 14 mph. The storm has maximum sustained winds of 90 mph.

“Get to safety and stay there,” North Carolina Gov. Roy Cooper said in a Thursday news conference.

The entire North Carolina coast remains under a Hurricane Warning, as well as Albemarle and Pamlico Sounds.

“We will be ready and we will not underestimate the damage this storm can cause,” North Carolina Governor Roy Cooper said in a Wednesday news conference. “… Today is the day to finish preparing.”

A mandatory evacuation order is already in effect for North Carolina’s barrier islands.

“Dorian should remain a powerful hurricane as it moves near or along the coast of North Carolina during the next several hours,” the NHC reports. “Dorian is forecast to become a post-tropical cyclone with hurricane-force winds by Saturday night as it approaches Nova Scotia.”

The briefing is scheduled to begin at 5 p.m. Eastern and can be streamed live right here.

NEW YORK (AP) — A Manhattan prosecutor trying to get President Donald Trump’s tax returns told a judge Monday that he was justified in demanding them, citing public reports of “extensive and protracted criminal conduct at the Trump Organization.”

Trump’s lawyers last month said the grand jury subpoena for the tax returns was issued in bad faith and amounted to harassment of the president.

RALEIGH, N.C. -- Stephanie Adams, of Nebo, tried her luck on a single Power 10s scratch-off ticket and walked away the winner of a $1 million top prize, according to a news release from the North Carolina Education Lottery.

Adams and her husband stopped at the Ingles Markets on West Henderson Street in Marion to do some shopping and decided to buy a few scratch-offs.

VIDEO: Goats removed from SC’s ‘Goat Island’ ahead of Isaias

Coronavirus in North Carolina: Number of cases passes 126,000; Hospitalizations drop to lowest number in weeks; Here’s a county-by-county breakdown of cases in the Piedmont Triad