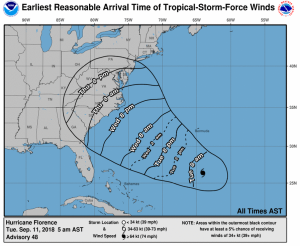 Note: This may not be the most recent forecast, please visit www.myfox8.com or open the FOX8 app for the very latest on Hurricane Florence.

Hurricane Florence has held onto its power as a Category 4 hurricane as it drives through toward the Carolinas, according to the National Hurricane Center.

Florence has remained solidly at a Category 4 since noon Monday. At 5 a.m. Tuesday, the NHC placed maximum sustained winds at 140 mph.

"Now as it continues to move to the west, yes, it may gain a little bit of strength, not enough to bump it up to a Category 5, but a Category 4 is a major and potentially catastrophic hurricane," said FOX8 Meteorologist Emily Byrd.

NHC forecasters expect "some strengthening" over the next day or so.

By 5 a.m., the hurricane was about 975 miles out from Cape Fear, North Carolina, and moving west at about 15 mph.

The National Hurricane Center issued a Storm Surge Watch and Hurricane Watch for the Carolina coasts ahead of potentially life-threatening conditions, the NHC reports.

The watch extends from Edisto Beach, South Carolina, all the way up to the North Carolina-Virginia border.

Areas under the Storm Surge Watch could see life-threatening inundation with rising waters moving inland from the coast over the next two days.

With a combination of storm surge and tides, areas along the coasts could see up several feet of flooding.

Large, destructive waves may join the surge along the immediate coast in areas of onshore winds.

Florence is forecasted to remain an "extremely dangerous major hurricane" through Thursday, the day when it's expected to reach the Carolinas.

During a press conference Monday morning, N.C. Gov. Roy Cooper said his state is "in the bull's-eye" of the storm.

The center of the hurricane was forecast to move between Bermuda and the Bahamas on Tuesday and Wednesday and approach the southeastern coast of the US on Thursday as a Category 3 storm or higher, according to the hurricane center.

Large swells generated by Florence are already affecting Bermuda and portions of the East Coast and will continue this week, the hurricane center said.

"These swells are likely to cause life-threatening surf and rip currents," the National Hurricane Center said.

Gov. Roy Cooper issued a State of Emergency on Friday in anticipation of the hurricane.

“While it’s still too early to know the storm’s path, we know we have to be prepared,” Gov. Cooper said, according to a press release. “During harvest, time is of the essence. Action today can avoid losses due to Florence.”

Cooper said he declared the State of Emergency and waived transportation rules to help farmers harvest and transport their crops more quickly.

The president ordered federal assistance to supplement state, tribal and local response efforts due to the emergency conditions resulting from Hurricane Florence.

The president's action authorizes the Federal Emergency Management Agency to coordinate all disaster relief efforts which have the purpose of alleviating the hardship and suffering caused by the emergency on the local population and to provide appropriate assistance for required emergency measures, according to a statement from the White House.

FEMA is authorized to identify, mobilize and provide at its discretion, equipment and resources necessary to alleviate the impacts of the emergency.

Nuke Bizzle, whose real name is Fontrell Baines, is accused of filing for $1.2 million worth of fraudulent unemployment claims under the CARES Act.

Meet Spartan! Spartan is a 1-year-old, Domestic Short Hair. Spartan is the ultimate lap kitty. If you want a snuggle buddy Spartan would make the purrfect addition to your home!

He is neutered and is up to date on his vaccines, FIV and Felv negative, half of his adoption fee has been sponsored by our Subaru loves pets adoption event and is now $45.

If you are interested please fill out an application here. Due to COVID-19 Randolph County Animal Services is available by appointment only.

The Peanuts animated classics, including "It’s the Great Pumpkin, Charlie Brown," will stream on AppleTV+ through a deal with WildBrain, Peanuts Worldwide and Lee Mendelson Film Productions, making Apple "the home for all things Peanuts," according to a news release.

Study ends without finding cause of rare cancer in NC town

Ranked: The rattiest cities in America

Coronavirus in North Carolina: NC reports over 1,500 new cases, bringing total past 248,000; Here’s a county-by-county breakdown of cases in the Piedmont Triad

Study ends without finding cause of rare cancer in NC town