The dangerous eyewall of Hurricane Dorian is just off the North Carolina coast Thursday night.

"Get to safety and stay there," North Carolina Gov. Roy Cooper said in a Thursday news conference.

As of 11 p.m. Thursday, the Category 2 storm is about 35 miles southeast of Wilmington and 70 miles southwest of Cape Lookout, headed northeast at 13 mph. The storm has maximum sustained winds of 100 mph. 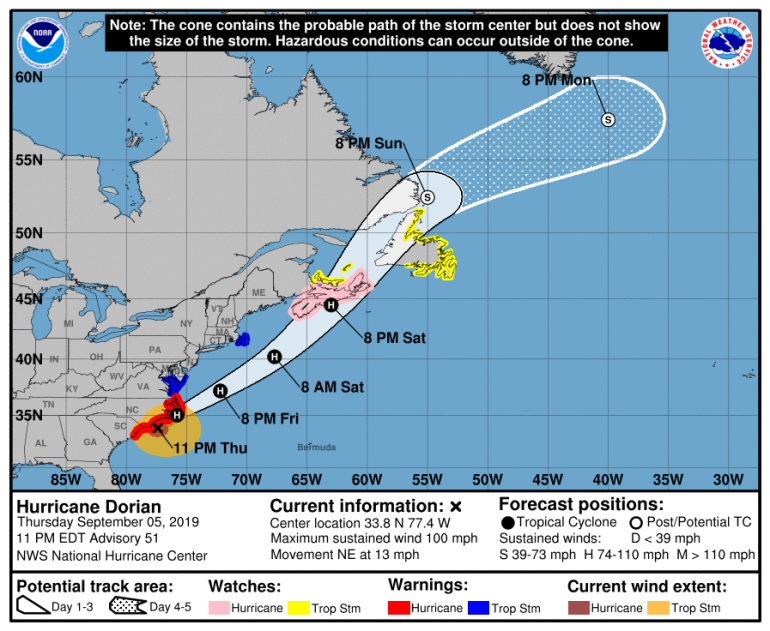 The coasts of both Carolinas are under a Hurricane Warning.

At 11 a.m. Wednesday, the National Hurricane Center extended the area under warning to stretch from north of the Savannah River to the North Carolina-Virginia border, as well as Albemarle and Pamlico Sounds.

"We will be ready and we will not underestimate the damage this storm can cause," North Carolina Governor Roy Cooper said in a Wednesday news conference. "... Today is the day to finish preparing."

A mandatory evacuation order is already in effect for North Carolina's barrier islands.

Jacob is looking for his Forever Family

The battle over abortion rights will make its way to the Senate floor on Tuesday when Republicans -- helmed by Senate Majority Leader Mitch McConnell -- bring two longstanding bills with little chance of passage up for votes before the chamber.

The bills, which have been introduced annually over the past few years, will pin down senators' stances on a divisive 2020 issue and follow through on a request from President Donald Trump.

No prison time for Indiana dentist, wife accused of locking child in cage

CRAWFORD COUNTY, Ind. (WXIN) – An Indiana dentist and his wife accused of locking their child in a cage will not serve time in prison.

Aimee and Alan Friz are accused of locking their daughter inside a cage at night and possibly at other times. According to court documents, they withheld food, water and sanitary facilities from her.

Guilford County's district attorney has been on the job for a little more than a year.

When Avery Crump was elected back in 2018, she became the first woman and the first African American to lead the community in this role.

No prison time for Indiana dentist, wife accused of locking child in cage