GREENSBORO, N.C. -- Devin and Rufus Scales both received an apology on behalf of the City of Greensboro and the Greensboro Police Department for their “negative encounter” on Aug. 4, 2014.

Both the Scales brothers said they were stopped for simply walking down the street.

Rufus’ arrest was captured on video by his brother Devin. Court documents show Officer T.B. Cole arrested both brothers and accused them of “standing or sitting upon the highway or street in such a way to impede the flow of traffic.”

Rufus was also charged with for allegedly being intoxicated and disrupted as well as resisting a public officer.

“He immediately just slams on his breaks and yells get out of the street you morons,” Rufus said.

Court documents accused Scales of not stopping or showing ID when instructed to do so, cursing and physically resisting “after being told to put his hands behind his back.”

Seven days after the incident, a letter was sent to Greensboro police and the mayor from Rev. Nelson Johnson on behalf of the Scales brothers.

The review process from the Complaint Review Committee and the investigation of the police department’s Professional Standards Division took months.

On March 31, the charges against Rufus Scales were dismissed. Devin Scales’ charges had been dropped in January.

On April 1, a letter was sent with the findings from the Complaint Review Committee along with an apology from City Manager Jim Westmoreland.

“The apology should be expressed so that everyone knows that they were wrong.” Rufus said.

Guilford County Chief Assistant District Attorney Howard Neumann said after viewing the video “it seemed to me the officer had other options.”

The Scales brothers’ attorney, Graham Holt, said without the video it would have been his clients word against police and “normally they believe the police over my client.”

Officer Cole was not wearing a body camera during the time of the arrest. The second responding officer was equipped with a body camera.

“It’s perfectly legal to walk down the street and they were walking down the left side of the street, the side of the street they should be walking on,” Holt said. “The sad thing is this is not unusual in our criminal justice system. There are thousands of people who have charges like this who have to go through this lengthy court process.”

Rufus and Devin recognize that the dismissal was a movement of several supporters and clergy members from around the community.

Though both admit they do not trust the police now they are open to gain that confidence in the Greensboro Police Department again.

In the apology letter from Westmoreland, Rufus and Devin were invited to have a conversation about the incident and discuss further recommended resolutions.

Holt and the Scales brothers want to make change to the CRC to provide an independent review board of the police and prevent their experience from happening to others.

“I got a lot of encouragement from them because they’re the ones that wanted to push forward and make something good happen,” Holt said.

Effective Thursday, Officer Cole has been reassigned work within Division 3 instead of his previous Southern Division. 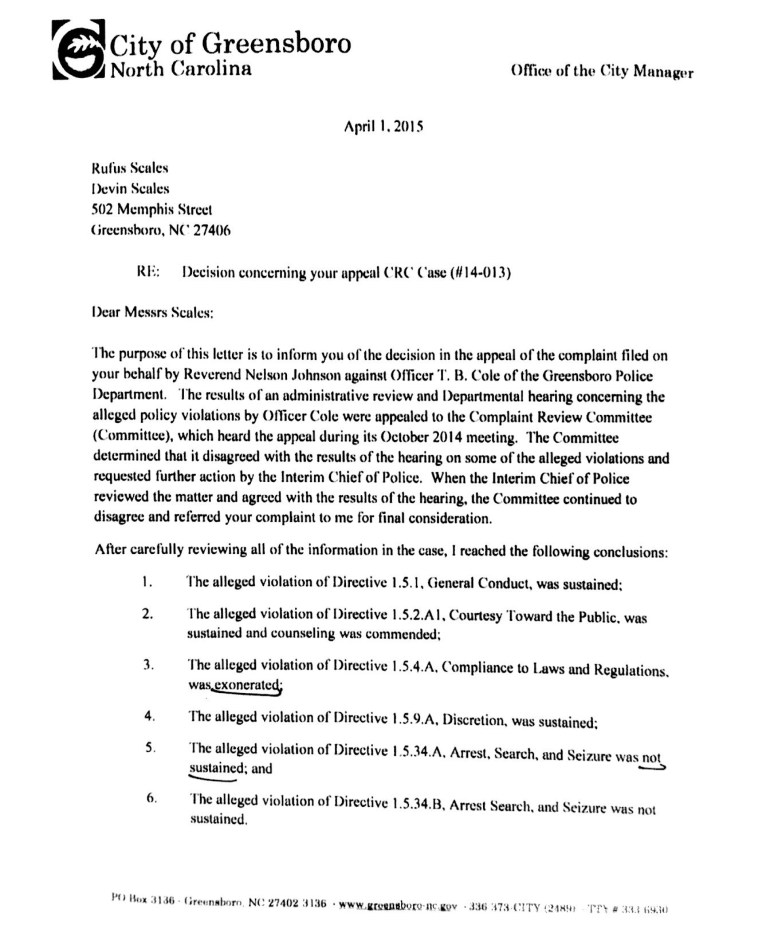 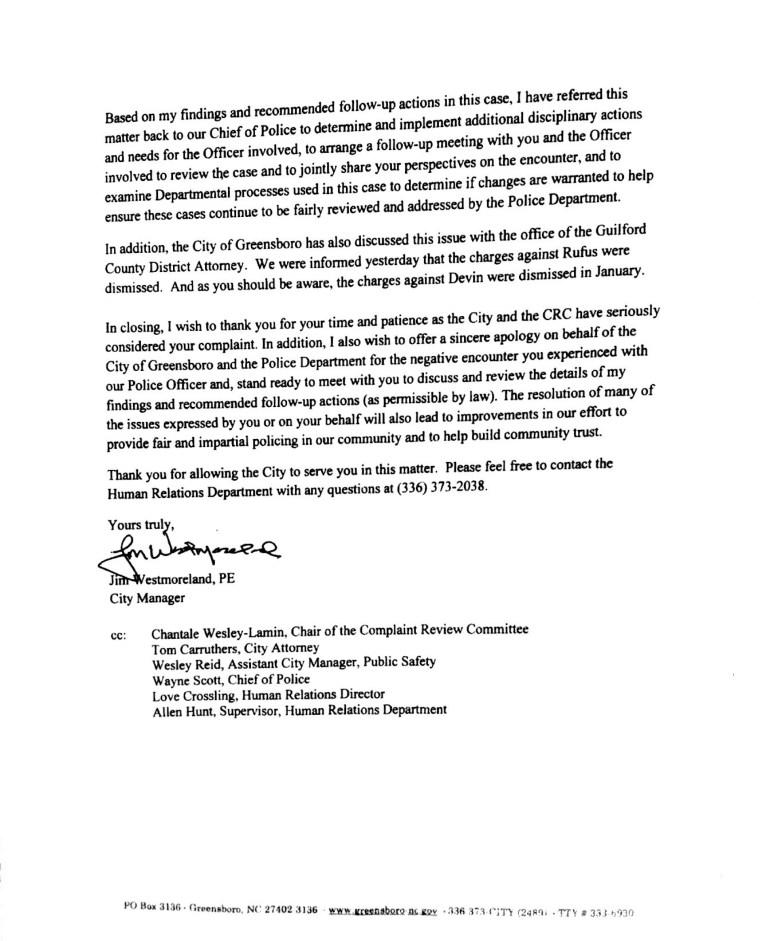 Alamance County moms protest for justice with parade of cars

ALAMANCE COUNTY, N.C. -- A group of moms in Alamance County are sharing a message of peace and togetherness with their community and the future generations.

"We have to speak up. We can't be silent and sometimes it's not safe to speak up, but when you have to do the right thing for people then you do it," said Mary Ellen Gollnick, an Alamance County mom.

WINSTON-SALEM, N.C. -- On Thursday, after a group of hundreds of protesters took a knee for 8 minutes and 46 seconds – which is how long former police officer Derek Chauvin’s knee was on George Floyd’s neck – most eyes were on the loud gathering as they made their way along Winston-Salem city streets on Thursday.

But it was a quiet conversation on a side street that spoke volumes.

BUFFALO, N.Y. (WIVB) – Graphic video shows Buffalo police shoving a protester, who tumbles backward and strikes his head on the pavement outside of City Hall.

The footage, captured by WBFO, shows one officer bending down to check on the man, who is lying on his back and appears to be bleeding from his ear, but another officer pulls him up and the police march around the injured man.

Alamance County moms protest for justice with parade of cars