Hurricane Michael was last reported as a Category 4 major hurricane by the National Hurricane Center.

"This is an unprecedented event as there are no Category 4 storms on record to have made landfall along the Florida Panhandle coast," a local hurricane statement from Tallahassee, Florida, said.

The storm has maximum sustained winds of 145 mph as of the NHC's 8 a.m. Wednesday advisory.

Florida Gov. Rick Scott said during a media conference Tuesday morning, “Let me be clear, Hurricane Michael is a monstrous storm. The time to prepare is now."

The storm is less than 70 miles away from Apalachicola, Florida, and moving in at 13 mph.

The NHC expects the center of Hurricane Michael to cross onto the Florida Panhandle or Florida Big Bend Area on Wednesday.

Already 150 national guard troops have been deployed to areas expected to be hit by the hurricane.

By Wednesday night and Thursday, the storm will cut through the southeastern United States.

The hurricane is expected to maintain at least tropical storm level strength as it crosses Georgia, South Carolina and North Carolina. 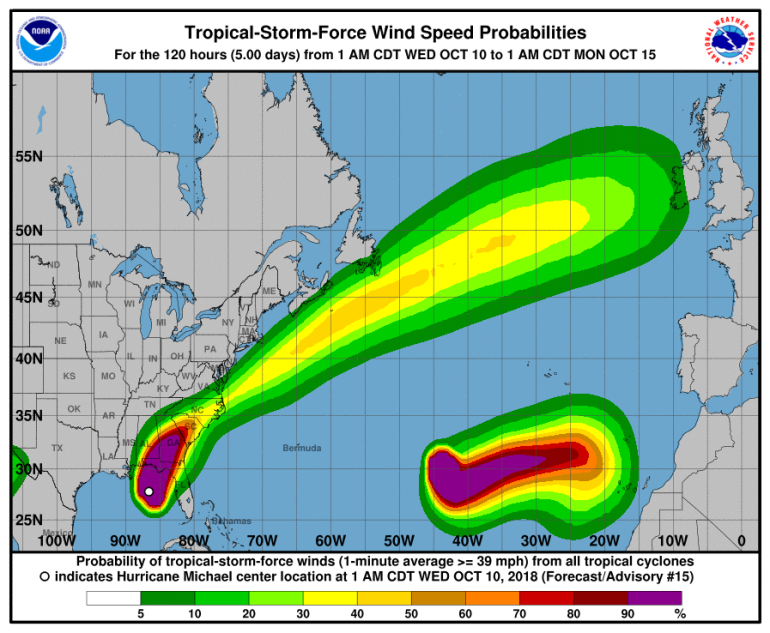 The storm's center and where it makes landfall with its destructive winds represent just one of several concerns. Among them:

• Storm surges of 9 to 12 feet could slam the coast from roughly Apalachicola to Cedar Key, Florida, with only slightly lower surges farther to the west along the Panhandle coast. "That means the water will come miles in shore and could easily be over the roofs of houses," Scott said.

• Heavy rain and flooding are expected not just for Florida but also for other parts of the Southeast. Up to 12 inches of rain could fall in Florida's Panhandle and Big Bend, southeastern Alabama and southern Georgia, while parts of the Carolinas -- recently deluged by Hurricane Florence -- and southern Virginia eventually could see up to 6 inches, the hurricane center said.

• Tornadoes could spawn in the Southeast on Tuesday night into Thursday, forecasters said.

• Damaging winds are expected to rake not just Florida but also southeastern Alabama and southern Georgia. If Michael's core comes ashore as a Category 2 or higher, it would be the strongest storm in terms of wind speed to make landfall in the country this year.

"You will see damage to infrastructure. You will see power outages," said Jeff Byard, associate administrator for the Federal Emergency Management Agency's Office of Response and Recovery.

'We need the residents to be leaving today'

A hurricane warning is in place from the Alabama-Florida border to the Suwannee River in Florida.

Meanwhile, tropical storm warnings extend from Florida's Chassahowitzka River to the Mississippi-Alabama border. Tropical storm watches are in effect in some coastal areas of Mississippi, Florida, Georgia and South Carolina.

Storm surge warnings are also in place along the Florida and Alabama coasts.

"This is a life-threatening situation. Persons located within these areas should take all necessary actions to protect life and property from rising water and the potential for other dangerous conditions," the hurricane center said.

US Rep. Neal Dunn, whose district includes Panama City, urged people under evacuation orders to get out before tropical-storm-force winds arrived. He focused on islands off the coast whose bridges may close as the storm approaches.

"You haven't got anywhere to go (if the bridges close)," he said Tuesday morning. "And then you're riding it out in your car instead of something else. So we need the residents to be leaving today ... because by this evening, those bridges are going to be in peril of being closed."

Scott extended a state of emergency to 35 counties and activated 2,500 National Guardsmen for hurricane duty. He said tolls were being suspended in the state's northwest region to ease the evacuation process, and the Florida Highway Patrol is sending nearly 350 state troopers to the Panhandle and Big Bend areas.

A Storm Surge Warning is in effect for...

A Hurricane Warning is in effect for...

A Tropical Storm Watch is in effect for...

Talk about extreme intensification... #Michael's central pressure dropped from 973 mb to 943 mb in 24 hours (5 am Tue-5 am Wed), then another 6 mb by 6 am Wed. Note: There is no historical record of a category 4 hurricane making landfall along the FL panhandle. #upwithFOX8 pic.twitter.com/3WTdX2zcGO

GLOUCESTER, Va. (WAVY) -- A 60-year-old man has been charged with second-degree murder and malicious wounding after his wife was found severely injured and her infant child was found dead Tuesday.

Goodman Millwork in Salisbury turn homes into works of art

SALISBURY, N.C. -- It can be difficult to turn the beauty of nature into something beautiful for your home. But a company in Salisbury has been doing that for more than a century.

Brad Jones has a closer look at how they turn out custom millwork that's Made in North Carolina.

SEOUL, South Korea (AP) — The missing mayor of South Korea's capital, reportedly embroiled in sexual harassment allegations, was found dead early Friday, more than half a day after giving his daughter a will-like message and then leaving home, police said.

Police said they located Park Won-soon’s body near a traditional restaurant in wooded hills in northern Seoul, more than seven hours after they launched a massive search for him.

Goodman Millwork in Salisbury turn homes into works of art

VIRAL VIDEO: COVID-19 through the eyes of a four-year-old

VIRAL VIDEO: COVID-19 through the eyes of a four-year-old