RALEIGH, N.C. — Gov. Pat McCrory announced Wednesday that the state is offering a reward up to $5,000 for information leading to the arrest of whoever is responsible for firebombing the Orange County Republican Party headquarters, according to a press release.

“The firebombing of a local political headquarters was clearly an act of intimidation and I’m going to do everything I can to find the individual or individuals who committed this assault on our democracy,” McCrory said. “I remain committed to using every resource as governor to assist local authorities in this investigation.” 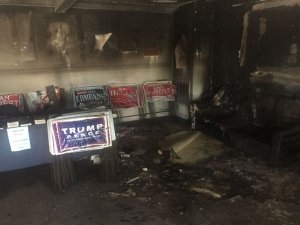 On Sunday, the office was vandalized with graffiti and damaged with a flammable material thrown through the window.

The graffiti included a swastika and the words, “Nazi Republicans leave town or else,” which was spray-painted in black on the side of an adjacent building.

Authorities said the flammable substance ignited inside the building, burning furniture and damaging the interior of the building. It was contained in a bottle thrown through the window.

Republican presidential nominee Donald Trump had strong words to say about the act, blaming it on “Animals representing Hillary Clinton.”

ALL SAFE IN ORANGE COUNTY, NORTH CAROLINA. With you all the way, will never forget. Now we have to win. Proud of you all! @NCGOP

The attack on the Orange County HQ @NCGOP office is horrific and unacceptable. Very grateful that everyone is safe.

Thinking of everyone at the @NCGOP after the horrific and unacceptable attack on the Orange County HQ. Grateful all are safe.

Anyone with information regarding the firebombing is asked to contact the State Bureau of Investigation at (919) 662-4500.

RALEIGH, N.C. -- North Carolinians hoping to get their driver's licenses may not have to take a road test as a House Bill clear its first hurdle.

House Bill 1189 passed the North Carolina House of Representatives on Wednesday with a bipartisan vote of 107-13 after it was introduced May 26.

DURHAM, N.C. (WNCN) -- The Durham community is mourning the loss of an eight-year-old girl after she died from complications related to COVID-19.

BURLINGTON, N.C. -- A 15-year-old girl has gone missing in Burlington, according to police.

At 11:21 Wednesday, police received a report of a missing teenager.

More than 10,000 people have been arrested in protests