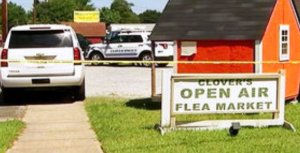 CLOVER, S.C. — Investigators think a man found dead inside a wall at a South Carolina flea market became trapped when he tried to break in the business, WSOC reported.

Clover Police Chief Randy Grice said 33-year-old William Powers was found trapped between an exterior and interior wall of the flea market Wednesday after someone complained of strong, foul odor.

Grice says it appears Powers broke into a shed, climbed into the ceiling using it to get to the front of the building before falling between the walls and getting trapped.

Grice told The Herald of Rock Hill that Powers’ truck was found nearby on May 27.

York County Coroner Sabrina Gast says it could take weeks and the results of toxicology tests to determine how Powers died.

Officers responded to the business on Kings Mountain Street for a report of strong odor around 8:30 a.m. Wednesday. Powers had been reported missing for two weeks.

Stimulus Check Calculator: How much money will you get?

‘She didn’t deserve what he did to her’: Daughter of slain Winston-Salem woman reveals messages sent by her alleged killer

‘All my Children’ star John Callahan dies at 66

Sgt. Chris Knox with the NCSHP said Trooper Nolan Sanders, a five-year veteran, was driving north on Interstate 795 in Pikeville shortly after 7:15 p.m. when he drove off the right side of the road and hit a concrete ditch culvert. The crash happened near the U.S. 70 bypass.

Millions of Americans are out of work due to the coronavirus pandemic.  Experts say it's essential to act quickly and apply for unemployment benefits to protect your financial future.

‘All my Children’ star John Callahan dies at 66

‘Off the charts’: Virus hotspots grow in middle America

‘I’ve never felt like this ever’: Iowa man shares his experience with COVID-19

Number of coronavirus cases in North Carolina over 1,000; here’s a county-by-county breakdown of cases in the Piedmont Triad

Stimulus Check Calculator: How much money will you get?

‘Off the charts’: Virus hotspots grow in middle America