Hurricane Dorian is moving 5 mph away from the Bahamas and toward the East Coast of the United States. As of the 2 p.m. update, Dorian is now a Category 2 storm with 110-mph winds.

A Hurricane Warning has been issued for the coast of South Carolina from north of Edisto Beach to the South Santee River.

A Hurricane Watch has been issued from north of South Santee River to Duck, North Carolina, including the Pamlico and Albemarle Sounds. 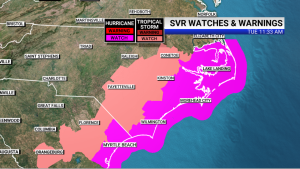 Conditions over North Carolina from Hurricane Dorian are forecast to begin deteriorating Wednesday with the greatest impacts expected Thursday into Friday, according to North Carolina Emergency Management.

4" to 6" of rain may accompany #Dorian as it steadily passes parallel to the NC coast. It is forecast to diminish in strength as it arrives Thursday night.

In the Piedmont, it will be breezy Thursday, but very little rain is expected... 1/4" or less. pic.twitter.com/B42fIfgFqB

It is not yet clear if the hurricane will make landfall in the Carolinas. 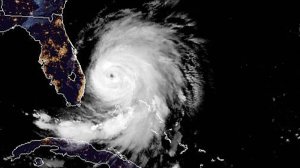 After holding the storm over roughly the same area for about 18 hours, the current that is steering Hurricane Dorian collapsed, but, later on Tuesday, forecasters say a weakness in the tropical ridge may cause Dorian to move north-northwest. It may pick up more forward speed over the next 48 hours.

The hurricane will then move dangerously close to the Florida east coast late today through Wednesday evening, and then very near the Georgia and South Carolina coasts Wednesday
night.

Dorian may be near or over the North Carolina coast late Thursday.

Classes are canceled for the remainder of this week at UNC-Wilmington, and a mandatory evacuation has been issued for 5 p.m. Tuesday from the college.

On Friday, N.C. Gov. Roy Cooper declared a state of emergency ahead of the storm, and put a price-gouging law into effect.

(2/3)
* #Dorian is still expected to weaken as it moves northward, though the wind field is expected to increase.
* Conditions over NC are forecast to begin deteriorating Wed afternoon & evening with the greatest impacts expected Thurs into Fri.#DorianNC #ncwx #severewx pic.twitter.com/qXm9UdpVIw

Interactive Map: How many coronavirus tests have been conducted in my state?

Hay fever or virus? For allergy sufferers, a season of worry

HAMBURG, Pa. (AP) — The spring breezes of 2020 are carrying more than just tree pollen. There’s a whiff of paranoia in the air.

For millions of seasonal allergy sufferers, the annual onset of watery eyes and scratchy throats is bumping up against the global spread of a new virus that produces its own constellation of respiratory symptoms. Forecasters are predicting a brutal spring allergy season for swaths of the U.S. at the same time that COVID-19 cases are rising dramatically.

DES MOINES, Iowa (AP) — Abortion providers with the help of the American Civil Liberties Union of Iowa on Monday sued Iowa Gov. Kim Reynolds for suspending abortion procedures as part of her blanket order to halt all elective and non-emergency medical procedures.

Reynolds, an abortion opponent who has vowed to end abortion in Iowa, said Sunday the move was not based on her personal ideology but a broad order to halt nonessential procedures to conserve medical equipment like ventilators and surgical masks.

Quarantine Together is a dating app for these times

But even as millions of Americans stay at home due to the coronavirus pandemic, nothing is stopping them from dating online. Daniel Ahmadizadeh and Christopher Smeder designed Quarantine Together, a dating app for exactly this moment.

Hay fever or virus? For allergy sufferers, a season of worry

Quarantine Together is a dating app for these times

Tractor-trailer with 86 pigs inside overturns in Winston-Salem

‘Without the trucks, nothing happens’: Trucking companies in desperate need of drivers

Model cited by White House says 82,000 people could die from coronavirus by August, even with social distancing

Number of coronavirus cases in North Carolina tops 1,300; here’s a county-by-county breakdown of cases in the Piedmont Triad

Tractor-trailer with 86 pigs inside overturns in Winston-Salem