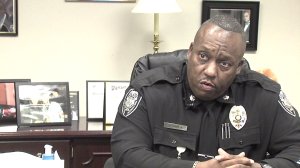 “The City thanks Deputy Chief Hinson for his years of service and we wish him well in his future endeavors,” the city said in a news release.

This comes the same week that an employee of a group home, co-owned by Hinson, was charged with the sexual assault of a minor.

On Monday, the Guilford County Sheriff’s Office charged Richard Vernell Heath, 51, with one count of statutory sex offense and two counts of indecent liberties with a child, according to court records. He was arrested Tuesday.

According to the News & Record, the state alleges that Hinson, as well as co-owner former Sgt. Kevin Chandler and their employees, failed to report the allegations to Child Protective Services or law enforcement.

The hottest cars on the market right now in each state

The global microchip shortage is showing no signs of slowing down as major automakers continue to halt production, leading to lower inventory levels, especially for the most in-demand vehicles. Demand for new cars has continued to outpace supply, with new cars selling over a week faster than in July, while demand for used cars has remained relatively steady.

After six months of searching for evidence of fraud, the firm hired by Republican lawmakers issued a report that experts described as riddled with errors, bias and flawed methodology. Still, even that partisan review came up with a vote tally that would not have altered the outcome, finding that Biden won by 360 more votes than the official results certified last year.

Are your old video games worth anything?

(NEXSTAR) – Thinking about unloading your old video game collection for some serious loot? Here’s hoping you remembered to keep those cartridges in mint condition.

Top-quality games of yesteryear are currently selling for big bucks at auction, with such titles as “The Legend of Zelda” and “Super Mario 64” going for $870,000 and $1.56 million, respectively, at auctions earlier this year. Other popular games commonly fetch upwards of tens of thousands of dollars, depending of course on their condition and desirability.

Woman shot after trying to run over NC police officer

21 million Americans say President Biden is ‘illegitimate’ and Trump should be restored by violence, survey finds

Do I have fall allergies or COVID-19?

Woman shot after trying to run over NC police officer

21 million Americans say President Biden is ‘illegitimate’ and Trump should be restored by violence, survey finds

2 shot in Greensboro on Hudgins Drive, taken to hospital