VIRGINIA BEACH, Va. — The gunman who had resigned before killing 12 people at the Virginia Beach Municipal Center sent a brief two-week notice that didn’t seem to foreshadow the massacre that would unfold hours later.

DeWayne Craddock’s last day was scheduled to be June 14, according to a copy of the two-sentence resignation email sent Friday morning.

He cited “personal reasons” for his resignation.

“I want to officially put in my two (2) weeks’ notice to vacant (sic) my position of Engineer III with the City of Virginia Beach. It has been a pleasure to serve the City, but due to personal reasons I must relieve my position,” Craddock, 40, wrote.

In response, a supervisor wrote: “I hope you are able to resolve your personal reasons. To be clear, your last work day will be Friday, June 14, 2019.”

“Thank you. Yes, that is correct,” Craddock replied. 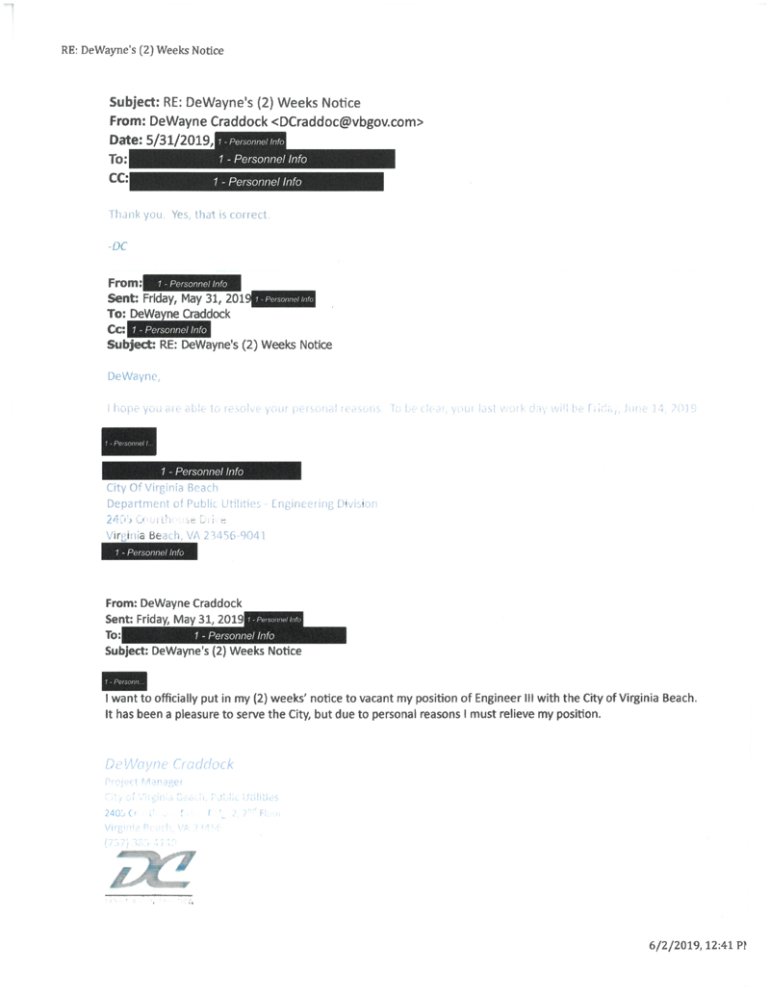 Craddock, a certified professional engineer with the Virginia Beach public utilities department for 15 years, killed a local contractor and 11 city workers nearing the end of his work day, according to officials.

He died after a lengthy shootout with authorities.

1 dead, 2 in hospital after fiery crash with 3 vehicles on I-40 near Thomasville Road in Winston-Salem

GASTONIA, N.C. (WJZY) -- One local nursing student jumped in to save an Olive Garden employee who was choking.

“I’ve been taught how to do it," said Madeline Hare. “I need to put my hands here, I need to do this. It just kind of happened."

TOKYO (AP) – USA Gymnastics says Simone Biles has decided to withdraw from the Olympic event finals in the vault and uneven bars.

She continues to be evaluated daily to determine whether she'll compete in the finals for floor exercise and balance beam.

(NEXSTAR) - Police arrested the 33-year-old aunt of two children who were found dead inside of her vehicle during a traffic stop in Maryland Wednesday night, police said.

The woman, identified as Nicole Johnson, had temporary custody of her niece, 7-year-old Joshlyn Johnson, and nephew, 5-year-old Larry O'Neil.

Man dies in crash on I-74 in High Point

Disney will require employees to be fully vaccinated

Is needle fear keeping folks from getting vaccinated for COVID?

‘This would not have happened’: Biles withdrawal draws comparisons to Strug, Karolyi gymnastics era

Partly Cloudy, not as hot Precip: 20%

Famous country music star leaves $1,000 tip for Greensboro waitress who was working a double while caring for her daughter at the restaurant

1 dead, 2 in hospital after fiery crash with 3 vehicles on I-40 near Thomasville Road in Winston-Salem

Man dies in crash on I-74 in High Point

‘Our economy depends on it’; Gov. Cooper releases new COVID guidelines; encourages unvaccinated workers to mask back up