FORSYTH COUNTY, N.C. — It’s been over a week since 6-year-old Forsyth County first grader Chelsea Klepzig was dragged nearly a mile by her school bus and the memory of it still haunts her dreams.

“Every night she tosses and turns, she wakes up thinking that she was scraped all over her whole body,” said Chelsea’s mother, Falon Abbassi.

Chelsea’s parents told FOX8 as she was getting off her bus, the bus driver closed the door on her arm and Chelsea held on for dear life as parts of her body dragged along the road.

The part of her body which took the brunt of the damage was her feet. However, her feet were protected by a nearly-new pair of FILA shoes.

“She had them [for] three months,” Abbassi said. “Three months, there was no scratches, no scuffs, no nothing and there wasn’t hardly anything left by the time it was all said and done.”

After FOX8’s Michael Hennessey broke the story, it went national. Hundreds of thousands of people saw it and one of them forwarded the story to FILA.

“At the time, we didn’t have the money to be able to get her anything new like that, not with Christmas right around the corner anyhow,” Abbassi said.

FILA contacted Hennessey, who — with her parents’ permission — passed along Chelsea’s information. Ten days before Christmas, a package from FILA, addressed to Chelsea, arrived at her front door.

“I think the fact that she actually had a box with her name on it was what had her jumping for joy,” Abbassi said.

Christmas had come early for Chelsea.

“We are very grateful to FILA,” Abbassi said. “I want them to know that her father and I are very grateful, as well as her grandmother and Chelsea, which they’ll hear from Chelsea here soon.”

Chelsea wrote a letter to FILA, explaining just how happy they made her. 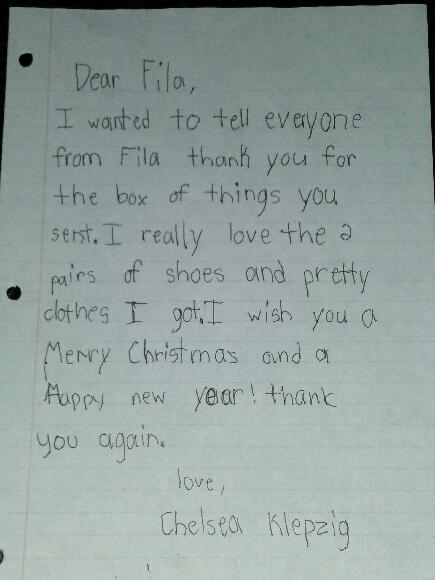 Airbnb has a plan to fix cleaning fees

Officers to get Congressional Gold Medals for Jan. …

How fast is NC’s economy growing? See its world ranking

Airbnb has a plan to fix cleaning fees

Officers to get Congressional Gold Medals for Jan. …

Nibbles is our Pet of the Week!

What we know so far about Moore County

Mother one of two people shot, killed in Guilford …

Regaining lung function after COVID-19 on this week’s …

Best tools to give as gifts

Best smart home gifts for everyone in your life

NC man who shot his father in the head is denied …

Best tools to give as gifts

Best smart home gifts for everyone in your life