"It's time that you guys know we are no longer playing around with the police departments," the caller said in the message left Sunday evening. "Aurora and Denver, we are about to start striking fear, shooting down all cops that we see by theirselves."

"This will go for the Sheriff's Department. You guys are evicting innocent people. Let us catch you by yourself and it's shots fired." 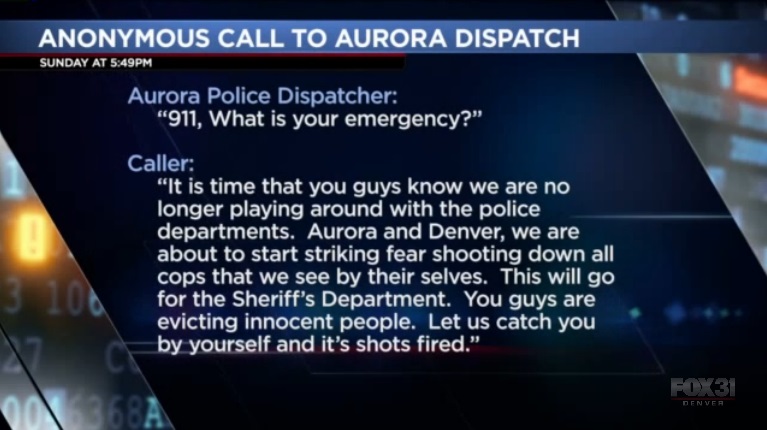 The audio of the message was obtained by CNN affiliate KDVR.

The Aurora Police Department described the message to CNN as an "alarming call," and one they shared with neighboring agencies. The department did not discuss police tactics in response to it.

A few hours later, Aurora officers responding to a call were shot at. The department said the two incidents were unrelated.

Law enforcement officers throughout the country say they feel under siege after a string of deadly attacks on police. This distrust of police, coming in the wake of controversial deaths by officers in Ferguson, Missouri, and elsewhere, helps fuel the bloodshed, they say.

"It's almost a radical rhetoric causing officers to say, 'Wait a second, I'm out here to serve the public. I saved a little old lady from a purse snatching. I gave CPR on the highway and saved somebody. Now, I'm a villain?'" said Chuck Canterbury, president of the national Fraternal Order of Police, a union representing more than 300,000 officers.

But the raw numbers -- at least, in terms of officers being gunned down -- tell a different story.

Nationally, police shooting deaths are down 16 percent this year, compared with the same period last year, according to the National Law Enforcement Officers Memorial Fund. There have been 26 firearms-related deaths this year, including two in training accidents, and 31 in 2014. Traffic accidents -- followed by shootings -- are the leading cause of police deaths.

BIRMINGHAM, Ala. (AP) — Alabama voters once again have the chance to remove the racist language of Jim Crow from the state's constitution, which was approved in 1901 to enshrine white supremacy as state law.

Courts have long since struck down legalized segregation, but past attempts to strip the offensive phrases have failed. Even though no organized opposition to the measure has emerged this time, some worry that conservative backlash to the Black Lives Matter movement could quash the proposal, which qualified for the ballot months before the nationwide demonstrations that occurred in the wake of the police killing of George Floyd.

COUSHATTA, La. (KTAL/KMSS)- Hundreds of people gathered Saturday to show their love and respect for a Louisiana teenager.

Kier Jackson, 17, was killed in a fatal shooting Wednesday.

GREENSBORO, N.C. -- Officers with the Greensboro police are currently on scene at the Four Season Town Centre at 2400 Vanstory Street investigating an aggravated assault, according to a Greensboro Police Department news release.

The initial call reporting the assault came in at 6 p.m.

‘Everything was on fire’: Witnesses describe moments after plane crashed into neighborhood

Panthers fall short against the Saints, 27-24