DENTON, N.C. — G. Brown Loflin, a beloved member of the Denton community, died Tuesday at the age of 84, according to his obituary.

Loflin was the founder of Denton FarmPark, home of the Southeast Old Threshers' Reunion, on Jim Elliott Road in Denton.

He was born on Nov. 23, 1934, in Davidson County, and in addition to starting up the thresher's reunion, he was a veteran of the U.S. Army Reserve and had served as a Davidson County commissioner for two terms and on the Secondary Roads Council under Governor Jim Holshouser.

He was a member of the Denton Lions Club and Denton Lodge #404 AF and AM, and trustee of Chapel Hill United Methodist Church. 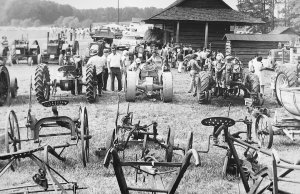 He survives his wife, Ruby Johson, who had been with since Oct. 5, 1957, as well as his son and daughter, four grandchildren and a great grandchild.

Loflin founded the Denton FarmPark back in 1970, nearly 50 years ago.

The Southeast Old Threshers' Reunion started when Loflin and some buddies decided to offer airplane rides to raise money for the local rescue squad. Farm machinery was added to give folks something to look at while they were waiting on their ride.

The plane rides were replaced by train rides when the Handy Dandy Railroad was put in service in the 1980s.

Despite wrestling with Parkinson's disease, Loflin remained the driving force behind what has become one of the largest events of its kind in the entire country.

According to his obituary, memorials may be made to the following organizations:

HOFFMAN ESTATES, Ill. (WGN) – An Illinois teen born with clubfoot defied the odds and competed in the state gymnastics championship this past weekend.

Sol Serratos' love for gymnastics began at an early age.

BOISE, Idaho — An 11-year-old girl toting a loaded AR-15 assault weapon appeared Monday at a legislative hearing with her grandfather, who is supporting a proposal that would allow visitors to Idaho who can legally possess firearms to carry a concealed handgun within city limits.

Charles Nielsen addressed the committee that voted to send the legislation to the full House as Bailey Nielsen stood at his side with the weapon slung over her right shoulder, but did not say anything.

Man survives after huge tree falls into his apartment, lands on his lap