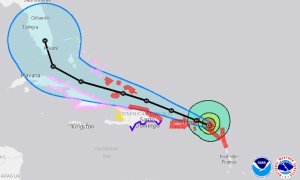 Hurricane Irma remained a Category 5 storm as of the National Hurricane Center’s 11 a.m. advisory, its eye passing over Barbuda about 1:47 a.m.

All of Florida’s peninsula is now in the new forecast cone.

The massive storm was located just west of St. Maarten. It was moving west-northwest at 16 mph with maximum sustained winds of 185 mph. It aimed at several islands, including Puerto Rico, Antigua, St. Kitts and Nevis, and the US Virgin Islands.

If that trend continues, it could prove favorable for South Florida — but an even further shift to the east could prove more ominous for other states, including Georgia and the Carolinas.

“Irma may be a big threat to us in the Carolinas,” said Kate Garner with the FOX8 Weather Center. 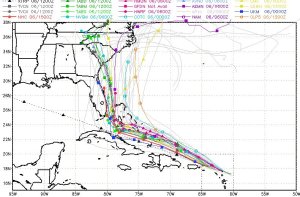 While Irma’s exact path is uncertain, wary shoppers stood in long lines outside some stores Tuesday in Florida as residents prepared for the storm.

“I would rather inconvenience our residents” with evacuations than suffer loss of life, Gimenez said.

Schools and county offices will be closed on Thursday and Friday.

And the state’s Monroe County, which includes the Florida Keys, said it will order visitors to evacuate by sunrise Wednesday, and residents should begin to evacuate 12 hours later.

In Florida, people were standing in lines at stores to buy water and other goods on Tuesday.

In Miami, supermarkets and other stores were already selling out of water and nonperishable food.

After declaring a state of emergency across Florida, Gov. Rick Scott said President Donald Trump had “offered the full resources of the federal government.”

White House Homeland Security Adviser Tom Bossert tweeted that the President had declared emergencies for Florida, Puerto Rico and the US Virgin Islands.

“I cannot stress this enough. Get prepared,” Scott said at a news conference. “Learn your evacuation zone. Listen to your locals. This storm has the potential to devastate this state. You have to take this seriously.”

Woman who confessed to killing her 9-year-old son pushed him into a canal in Florida, affidavit says

LEXINGTON, N.C. -- Fire crews in Lexington are working to extinguish a blaze on Sunday, according to Davidson County officials.

MACON COUNTY, N.C. -- A deputy in Macon County and his wife were killed in an accident in Georgia on Saturday afternoon, according to a Macon County Sheriff's Office statement.

The sheriff's office is calling for prayers for deputy David Head and his wife Dawn.

On Sunday at 5 a.m., officers with the BPD responded to an apartment at 1515 S. Mebane Street in reference to a domestic disturbance call.

15-year-old set to graduate from high school and college

East Carolina University cuts 4 sports as part of plan to save $4.9 million

Hairstylist with coronavirus worked and exposed 91 people to virus